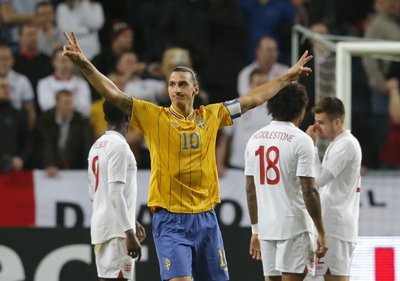 PHUKET: Zlatan Ibrahimovic christened Sweden’s new stadium with a sprinkling of gold last night, scoring three classy goals and an unforgettable one in a 4-2 friendly win over England, while Argentina’s Lionel Messi drew a blank in Riyadh.

With only a handful of low-key World Cup qualifiers on the fixture list, coaches of some of the likely favorites for the trophy in Brazil in 2014 got a last chance this year to cast an eye over their squads in a raft of friendlies.

World champions Spain beat Panama 5-1 in Panama City, the Netherlands and Germany drew 0-0 in Amsterdam, France won 2-1 in Italy and Messi’s Argentina were held 0-0 by Saudi Arabia but it was Sweden’s victory in Stockholm that stole the limelight.

Ibrahimovic gave Sweden the advantage with an instinctive finish but after an experimental England, who gave debuts to six players, took a 2-1 halftime lead the Paris St Germain striker provided a grandstand finale to a lively friendly.

He equalized with a shot after a beautiful piece of chest control, slammed in a low free kick to put the Swedes ahead but saved the best until last with an acrobatic overhead kick from 25 meters to raise the roof of the Friends Arena.

“Ibrahimovic’s performance was certainly world-class. Credit to him, he scored one of the best goals I’ve ever seen live. It was his night,” England captain Steven Gerrard told ITV on the night of his 100th international cap.

Sweden coach Erik Hamren told a news conference: “The last one? You might never see that again in your life. Unbelievable, really.”

England had looked on course for a first away win against Sweden since 1965 after goals from Danny Welbeck and debutant Steven Caulker but slipped to their first defeat in 90 minutes since manager Roy Hodgson took over in May.

Hodgson’s team, who will continue their World Cup qualifying campaign in March with work to do after tiny Balkan nation Montenegro went top of their group with a 3-0 victory over San Marino, gave starting places to debutants Raheem Sterling, Leon Osman and Caulker.

Germany, whose last match was a 4-4 World Cup qualifying draw with Sweden, kept a clean sheet in the Netherlands in a friendly the visitors dominated.

Gomis Winner
“Both teams played a solid game,” Germany captain Philipp Lahm said. “We did not allow too many chances at the back and that was positive.

“If you draw 4-4 in your previous game it is important your defense is safer next time.”

Pedro scored twice for European champions Spain while David Villa and Sergio Ramos were also on the score sheet against lowly Panama.

Bafetimbi Gomis came off the bench to give France victory in Parma against Euro 2012 runners-up Italy.

Mario Balotelli set up Stephan El Shaarawy to put Italy ahead with his first goal for his country but France hit back almost immediately with a superb strike from Mathieu Valbuena.

Messi failed in his bid to set an outright record for the most Argentina goals in a calendar year.

Saudi goalkeeper Waleed Abdullah did well to keep out substitute Augusto Fernandez and Messi, who shares the Argentina record of 12 goals in a year with Gabriel Batistuta.

Former Cold War rivals Russia and the United States met for the first time on a football pitch since 2000, drawing 2-2 in Krasnodar where Mix Diskerud grabbed an equalizer for the Americans deep into stoppage time.

Highly-rated Belgium got a reality check as they lost 2-1 in a friendly in Romania while Poland were beaten 3-1 at home by Uruguay with Luis Suarez and Edinson Cavani both scoring.

Serbia overcame Chile 3-1 in Switzerland after which Chile’s coach Claudio Borghi was fired.

Almost unnoticed, Montenegro stole in to go top of World Cup Group H qualifying with a comfortable win over whipping boys San Marino. Their 3-0 victory put them two points above England with 10 points from four matches.

Northern Ireland needed a last-minute equalizer to claim a 1-1 draw at home to Azerbaijan in Group F.

Phuket Governor called on to curb “out of control’ corruption