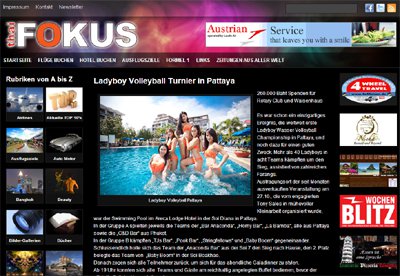 The technology crime suppression police unit arrested Peter Alois Anton Neunteufel, 61, at his apartment in Pattaya yesterday, 100 kilometers south east of Bangkok.
Neunteufel, the owner of the German-language ThaiFokus monthly magazine, had lived in the beach town for more than seven years.

The Salzburg native had allegedly sent emails to a well-known German consumer goods manufacturer threatening to leak stories saying the company was selling contaminated food, unless it paid him 15 million euros, Paoin said.

Neunteufel will be extradited to face charges in Germany because the unidentified company is based there, Paoin said.

“He was always looking for a buyer for his magazine in Pattaya,” said Hans Fritschi, a Pattaya-based Swiss national who started The Farang magazine there. “I don’t think ThaiFokus has been published for several months now,” he added.