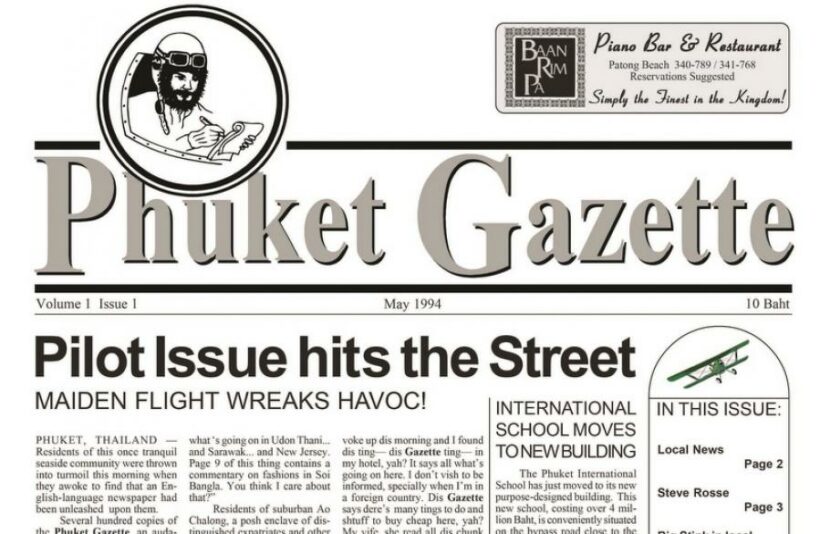 PHUKET: It’s like Grandma’s little drinking problem. Everyone knows, but people don’t much talk about it. And so it goes with the publishers of hard-copy newspapers these days – worldwide. We know where print is headed, so the only real choices are whether to get out now or, say two years from now.

We’ve opted for the former, meaning that the paper, launched 23 years ago in May 1994, will no longer be distributed as a standalone publication here, with effect from the end of this month.

But readers will find a ‘Gazette Lite’ going out to a vastly larger audience as a Phuket-dedicated supplement in The Nation every weekend.

With rising revenues in the Gazette Online and irreversible flatulence in small-scale hard-copy newspapers (those with print runs of less than 10,000), the decision to channel our resources out of local print and into a broader readership has not been difficult.

Commercial advertisers in the Gazette with print preferences will continue to be well catered for amid our Phuket pages in The Nation, giving that content an audience roughly eight times what is possible in Phuket and the Andaman. Our advertisers will of course also retain their presence aboard the 12 major international airlines into and out of Thailand (both Bangkok and Phuket airports).

Classified advertisers will also get a bonus, with all of their ads now enjoying national, as opposed to purely local, distribution.

Marketers gone digital (who hasn’t?) already know the power of the Gazette Online, the island’s top rated English-language web and mobi platforms for both traffic and page views (source: Google Analytics). They also know that our stories aboard these platforms appear in our Facebook, the island’s largest by far for English language, with 168,000 followers.

We do not celebrate the departure of a masthead that has been a part of Phuket for nearly a quarter of a century, but sentimental we must not be. Indeed, our editors and reporters are more than pleased. Free of the chains of the ancient and tedious grinds of hard-copy layout, they will now be spending far less time with their mice and more as journalists – ‘out there’ getting stories, writing ’em up and interacting more closely with the community.

For myself, what a great ride it has been, watching the island morph from village paradise (as seen by a refugee from New York/Hong Kong) to genuine international tourist destination offering just about anything one might ever want on a holiday.

The scar tissue of Phuket’s development is acknowledged and has given us plenty to write about, but without the candor of such reports alongside all the positives, it’s not difficult to imagine that the negatives could have gained the upper hand here. They’ve not, but they’ll keep trying, so we will continue to do our bit, with increasing digital firepower and some new media alliances going forward.