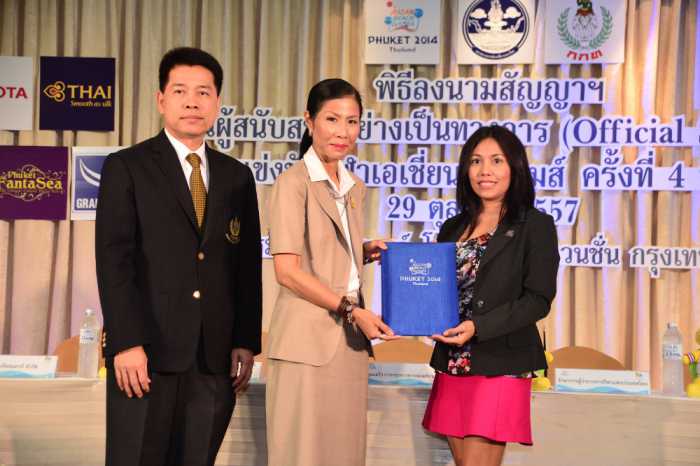 PHUKET: The Sports Authority of Thailand (SAT) has cemented the exclusive Media Partnership Agreement of long-established news and events organization the Phuket Gazette as the official media sponsor of the 4th Annual Asian Beach Games.

The confirmation ceremony for the 10-day sporting event was held at the Grand Four Wings Convention Hotel in Bangkok on Wednesday.

The ceremony was initiated by Thailand’s Minister of Tourism and Sports, Kobkarn Wattanavrangkul, who welcomed the event’s corporate sponsors and commenced the contract signing.

“We believe that the Phuket Gazette can help promote and enhance the impact of this event – encouraging many people, both Thai and foreign, to be involved,” SAT spokesman Theerawat Sinlapaarcha said.

This year marks the first in which the games have been hosted on the holiday island, which has undergone a heavy makeover following May’s military coup.

The continuously growing sporting event promises to bring nail-biting action to the shores of the “Pearl of the Andaman” with its biggest year to date, and with the Gazette providing exclusive coverage.

Having added a host of new sports to the schedule (story here), organizers are expecting more than 13,000 visitors from 47 countries to come to the island to participate in or witness the action firsthand.

With 26 sports – ranging from air sports to beach basketball – and 168 gold medals up for grabs, the Gazette is proud to represent the island and take the lead in providing up-to-date coverage of the exciting happenings that will soon unfold before us.