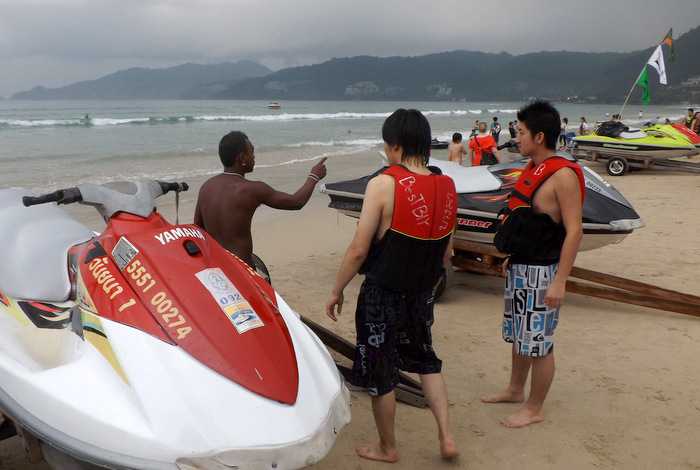 PHUKET: Phuket Marine Office Chief Phuripat Theerakulpisut confirmed to the Phuket Gazette this week that his office has granted operators permission to continue to rent out jet-skis, despite widespread public furor over the industry’s history of horrific accidents, extortion and violence against tourists.

His reasons for bowing yet again to the operators’ wishes continue shrouded, his only concessions to the public interest this time being a promise of tighter controls, including the creation of dedicated, roped-off swimming zones.

“We held several meetings with local officials and jet-ski operators to come up with the new rules at Patong and other beaches,” Mr Phuripat said.

A key condition is that jet-skis may no longer be kept on the beach. Instead, they must remain in the water or otherwise be removed completely from the sand.

“The operators will have 12 areas in Patong where jet-skis may remain in the water near the beach. These areas will lie between 16 roped off swimming zones,” the Marine chief explained.

“Each swimming zone will be 150 meters wide at the beach and extend 50m into the water. Buoys will be attached to the ropes to mark the outer boundaries of the swimming zones, which will be 100m wide.”

However, Patong Mayor Charlermluk Kebsup told the Gazette on Thursday that her officers would have to wait until the seas were calm enough to set up the swimming zones.

“Obviously, we can’t set them up while there is still strong surf, but we will put up the ropes as soon as practicable,” she said.

Parasail operators will also be allowed to keep working from the beaches, but not in areas where jet-skis come and go, Mr Phuripat explained

“There are 286 jet-ski operators and 36 parasail operators registered with us. They all have insurance.
There will be no more,” he assured.

Mr Phuripat warned that jet-ski operators were walking a tightrope on whether or not they will be permitted to continue renting out their machines to tourists.

“If they fail to comply with the new regulations or are involved in any major accidents, they ‘may’ lose their right to rent out jet-skis entirely,” he said.

But his “warning” was very quickly put to the test on Tuesday when he faced the incident at Kata in which a female tourist lying on a mat on the beach was run over by jeep towing a jet-ski trailer (story here).

“We do not have enough officers to check on the operators every day,” Mr Phuripat admitted. “We have set the rules and will check on them ‘from time to time’.

“If there is a problem, the police will be brought in. If an operator causes a ‘serious’ issue, that would surely lead to us to revoking his permission to continue renting out jet-skis. We will review such instances case by case.”

Patong Jet-Ski Club President Nucha Petchvimol told the Gazette that his members were ‘willing’ to follow the new rules.

“We are not bad guys. We appreciate being granted permission to continue renting out jet-skis. We will do our best to impress tourists,” he said.

“We accept whatever the officials require and we are always willing to help by cleaning the beach or assisting as volunteer lifeguards.”

Watchara Koysakul, head of the Kamala Jet-Ski Club, also said that he had no reservations about complying with the new rules, but hoped for a relaxation of them next low season, after April.

“We have no problems with leaving the jet-skis in the water during the high season, when the sea is calm,” he said.

“However, when the low season comes, officials might want to review the new rules. I hope they will provide us a place to earn our living.”