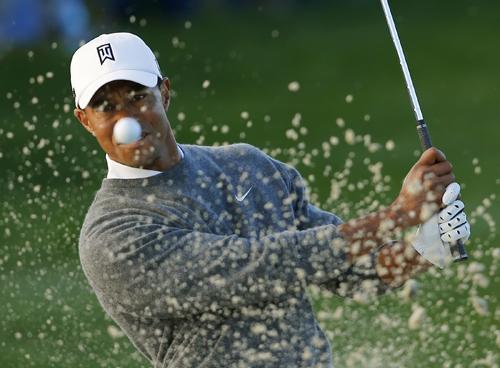 Six strokes in front overnight at 17 under with 11 holes to play in the fog-delayed final round, Woods kept his closest challengers at bay as he signed off with a level-par 72 on a cold, sun-splashed afternoon at Torrey Pines.

The 14-times major champion briefly moved eight ahead before his unexpected stumble in increasingly difficult conditions over the four-hole stretch from the 14th but he parred the last to post a 14-under total of 274.

Defending champion Brandt Snedeker dropped one shot in the five holes he had to complete on Monday, carding a 69 to tie for second with fellow American Josh Teater (69).

“It got a little ugly toward the end,” Woods said greenside after removing his cap and raising both arms skywards to celebrate his seventh victory at the event.

“We played nine holes in just over three hours, and three of them are par threes. I started losing my patience a little bit, and that’s when I made a few mistakes.

“But all my good play before that really allowed me to afford those mistakes. I’m excited the way I played all week. I hit the ball well, pretty much did everything well this week and built myself a nice little cushion.”

Woods triumphed in a third different PGA Tour event for a seventh time, having already recorded seven wins apiece at the WGC-Bridgestone Invitational and the Arnold Palmer Invitational.

His 75th career victory on the U.S. circuit put him seven behind the record 82 piled up by Sam Snead, the only player ahead of him in the all-time standings.

“A win always makes it special,” said Woods, who clinched the most recent of his 14 majors in the 2008 U.S. Open at Torrey Pines. “Does it feel good? Yes. Does it give me confidence? Absolutely. I’m excited about this year.”

PHUKET: With just 500 days to go until the 2014 World Cup kicks off in Brazil, soccer’s world governing body FIFA warned that the hosts cannot afford any further delays in getting their venues ready.

The global football tournament, followed by the Olympic Games in Rio de Janeiro two years later, will test Brazil’s aspiration to become a developed nation. But delays in building stadiums and preparing hotels and airports to receive more than half a million football fans could turn the event into an embarrassment.

In June Brazil will host the eight-nation Confederations Cup, a dress rehearsal for the World Cup.

FIFA has twice agreed to push back the handover deadline of four of the six stadiums to be used in the Confederations Cup and FIFA general secretary Jerome Valcke warned yesterday that there will be no further extension beyond the April 15 delivery date.

“We cannot go beyond this date. There cannot be any further delays. All the stadiums must be ready by then,” Valcke said after inspecting work on the new Mané Garrincha stadium in Brasilia, where Japan play Brazil on June 15 in the opening game of the Confederations Cup.

Despite the warning, the giant Maracana stadium which will host the finals of both the Confederations Cup and the World Cup will not meet FIFA’s deadline as its owner, the state government of Rio, has already said it will not be ready until the end of May.

The Mané Garrincha stadium in Brasilia is 87 percent complete and builders are working round the clock to erect steel trestles that will hold up the roof covering 70,000 seats at the second largest of the 12 stadiums to be used in the World Cup.

Even at completed venues there is still work to be done.

Valcke could not make any calls on his cell phone at the Arena Castelao in the northern city of Fortaleza, where the first of Brazil’s 2014 World Cup stadiums to be ready held its first matches on Sunday.

The FIFA official signed an agreement with Brazil’s communications ministry on Monday committing Brazil to add cell phone antennas and other communication systems around the 12 World Cup stadiums.

“There will be a 4G level of communication all around the country,” Valcke told reporters, before leaving Brasilia for Salvador, where the Fonte Nova stadium is 90 percent complete.

There are still concerns about the Recife stadium, which is 83.6 percent complete according to contractor Odebrecht, and the Maracana is only 80 percent ready and the furthest behind schedule.

Maracana should have reopened in February after its $450 million renovation but delays have forced a postponement.

Venue of the 1950 World Cup final, in which Uruguay upset hosts Brazil in an unforgettable decider, Maracana was once the world’s largest stadium packing crowds of up to 200,000 people.

The upgraded stadium, with a reduced capacity of 76,000 spectators, is due to reopen on June 2 with a friendly between Brazil and England.

A nightclub fire that killed 231 people in southern Brazil on Sunday raised security concerns in Brazilian sporting venues but Valcke rejected any connection to football.

PHUKET: Kimi Raikkonen set his sights on a championship challenge with Lotus after the Formula One team unveiled their new car yesterday.

“It’s clear from working with them that they are racers,” said the 33-year-old Finn, the 2007 world champion with Ferrari who made an impressive comeback last season after two years in rallying.

“You can see in their history that they’ve won championships. Nothing I saw last year made me think that another championship was impossible,” he said of the former Renault and Benetton team.

“The team have beaten everyone before, there’s nothing to say they can’t do it again.”

“Our ambitious plan to turn ourselves into one of the top teams in Formula One is coming to fruition and now we need to harness this with strong and regular podium results,” he said.

Renault won championships in 2005 and 2006, while predecessors Benetton took drivers’ titles with Michael Schumacher in 1994 and 1995.

The original Lotus team, whose name lives on with the current Enstone outfit even if there is no direct connection, won seven constructors’ crowns between 1963 and 1978.