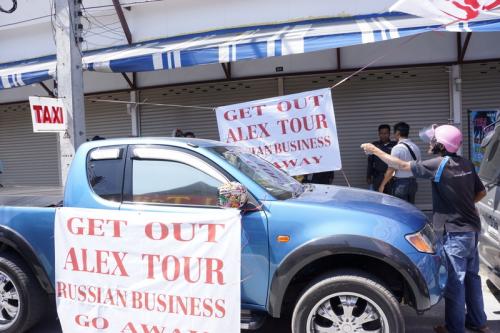 The mob of angry taxi drivers from the Baan Bangtao Taxi Club pulled down the signs of one of their primary targets, Alex Holiday Tour Co Ltd in Cherng Talay, alleging that the company was run by Russians who were undercutting the prices of local people, and making it impossible to survive.

“Locals explained to me that the Russian-owned businesses were stealing tourists from them, which was having a significant effect on their income,” Cherng Talay Administrative Organization (OrBorTor) President Ma-ann Samran told the Phuket Gazette this afternoon

In addition to offering tour packages and supplying tour guides, these businesses are telling tourists to avoid using local tuk-tuks and taxis, he added.

Anticipating the protest, many of the tour operators catering to Russians remained closed today, including the taxi mob’s central target, Alex Holiday Tour.

Under pressure from the mob, the director of Alex Holiday Tour, Dan Wannaborvorn, this afternoon signed the necessary documents to permanently close his shop, despite employing Thai staff and being fully legal, Mr Ma-ann said.

“Alex Holiday Tour’s director closed the business to avoid having any further problems with the locals,” Mr Ma-ann said.

“We heard that the Russian companies are working as a network on the island,” Mr Pairoj told the Gazette. “Russian time-share touts drive around the island looking for customers and offer them free tours of Phuket if they listen to a presentation about condos.”

“The office staff then takes them shopping and sightseeing, and – as you can guess – they get commissions from the shops,” he added.

While the mob stood outside of the tour office, a pair of foreigners arrived at the scene on a motorbike.

“We thought they were working for one of the Russian companies,” Mr Pairoj explained.

Allegedly not having work permits or passports with them, but plenty of time-share fliers, the pair were brought to the Cherng Talay Police Station for questioning.

“After establishing that they had nothing to do with the Russian tour agencies, the pair were released,” Mr Ma-ann told the Gazette.

Today’s protests comes just one day after Baan Bangtao Taxi Club’s first protest, where about 50 drivers from the club gathered in front of the Bangtao Beach Hotel, calling for Phuket officials to take action against Russian businesses. Emblazoned on banners and placards held by protesters were messages similar to those seen at the protest today.

The protest by taxi drivers in Bang Tao follows a blockade of the beachfront road in Karon on January 3 by local taxi and tuk-tuk drivers protesting against Russian tour operators in the Kata-Karon area (story here).

Despite allegations that the “Russian tour counters” in Kata-Karon were devastating to the livelihoods of local Thai people, officials investigating the complaints found that the tour counters in question were owned and operated by Thai nationals (story here).

Phuket Gazette Sports: All about the numbers