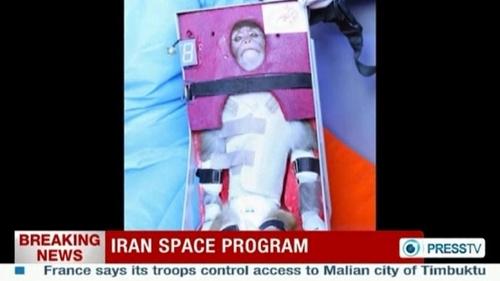 PHUKET: Iran said yesterday it had launched a live monkey into space, seeking to show off missile systems that have alarmed the West because the technology could potentially be used to deliver a nuclear warhead.

The Defence Ministry announced the launch as world powers sought to agree a date and venue with Iran for resuming talks to resolve a standoff with the West over Tehran’s contested nuclear programme before it degenerates into a new Middle East war.

Efforts to nail down a new meeting have failed repeatedly and the powers fear Iran is exploiting the diplomatic vacuum to hone the means to produce nuclear weapons.

The Islamic Republic denies seeking weapons capability and says it seeks only electricity from its uranium enrichment so it can export more of its considerable oil wealth.

The powers have proposed new talks in February, a spokesman for the European Union’s foreign policy chief said on Monday, hours after Russia urged all concerned to “stop behaving like children” and commit to a meeting.

Iran earlier in the day denied media reports of a major explosion at one of its most sensitive, underground enrichment plants, describing them as Western propaganda designed to influence the nuclear talks.

The Defence Ministry said the space launch of the monkey coincided “with the days of” the Prophet Mohammad’s birthday, which was last week, but gave no date, according to a statement carried by the official news agency IRNA.

The launch was “another giant step” in space technology and biological research “which is the monopoly of a few countries”, the statement said.

The small grey monkey was pictured strapped into a padded seat and being loaded into the Kavoshgar rocket dubbed “Pishgam” (Pioneer) which state media said reached a height of more than 120 km (75 miles).

“This shipment returned safely to Earth with the anticipated speed along with the live organism,” Defence Minister Ahmad Vahidi told the semi-official Fars news agency. “The launch of Kavoshgar and its retrieval is the first step towards sending humans into space in the next phase.”

There was no independent confirmation of the launch.

PHUKET: Yemeni forces intercepted a ship on January 23 carrying a large cache of weapons – including surface-to-air missiles – that U.S. officials suspect were being smuggled from Iran and destined for Yemeni insurgents, officials said yesterday.

Yemen’s government said the arms intercepted aboard the ship off the country’s coast also included military grade explosives, rocket-propelled grenades and bomb-making equipment, according to a statement by its embassy in Washington.

A U.S. official, speaking on condition of anonymity, confirmed the operation was coordinated with the U.S. Navy and that a Navy destroyer was nearby.

A second official told Reuters the intercepted shipment was believed to have been from Iran and destined for insurgents, likely Houthis.

“This demonstrates the ever pernicious Iranian meddling in other countries in the region,” said the second U.S. official, who also spoke on condition of anonymity.

PHUKET: An Italian court said yesterday the cause of one of the country’s most enduring aviation mysteries, a plane that broke up over the coast of Sicily 32 years ago killing 81 people, was most probably a missile hitting the aircraft.

The case has divided Italians since the plane went down on June 27, 1980, when Italy was still the scene of both Cold War tensions and domestic militancy from the left and the right.

The court, in what is seen as the final ruling of many, said the state must pay damages to the victims’ families because the safety of the passengers had not been guaranteed.

There were “ample and congruent” indications that a missile was the cause of the disaster, the court said in its decision.

A court in 2004 said the plane went down in a “war-like scenario”. But numerous investigations failed to determine whether the plane, a DC-9 of the now-defunct domestic airline Itavia, was destroyed by a bomb or a missile.

It broke up over the southern Mediterranean near the island of Ustica, whose name has become synonymous with the incident.

Media reports based on radar monitoring data said fighter aircraft from several NATO nations were in the area at the time of the crash, possibly following a Libyan MIG that was trying to evade radar control by flying close to the civilian plane.

Another theory was that the plane had entered a military exercise area and was hit by a missile launched by a fighter jet that had mistaken it for an enemy intruder.

Most Italians believe the cause of the crash, which has been the subject of a film and numerous books, was covered up for security or military reasons.

During investigations, documents disappeared and air traffic voice recordings were found to have either been erased or tampered with.

In 2007, an appeals court upheld an acquittal handed down in 2004 of two former air force generals who had been accused of giving false information about the disaster.

That ruling had been considered the end of the case but the investigation was reopened in 2009 after former President Francesco Cossiga said he was sure the plane had been hit by a missile. Cossiga died in 2010.

Italian courts publish the reasonings behind their rulings weeks or months after they are made public. No further details were available about the latest ruling.