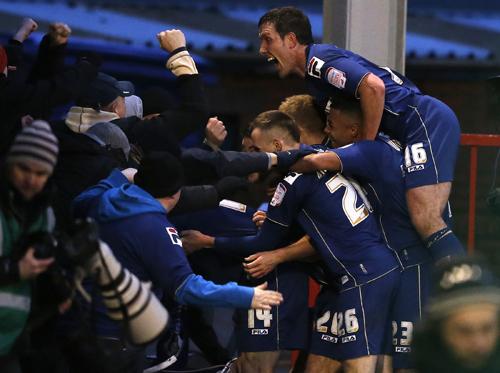 The hard-up League One side, who put three backroom staff on gardening leave last month to cut costs, were rewarded with a tie against Everton at their antiquated Boundary Park home in the fifth round.

Holders Chelsea were also heading for a surprise defeat at third-tier Brentford until much-maligned striker Fernando Torres hit a late equaliser to salvage a 2-2 draw and a replay at Stamford Bridge.

Norwich suffered the humiliation of becoming the first top-flight side to lose to a minor league team for 24 years when they were beaten 1-0 at home by Luton Town on Saturday.

Oldham, languishing in 19th place in League One, were irresistible in front of their own fans, going ahead with a Matt Smith header in the second minute.

On a pitch cleared of heavy snow, Luis Suarez leveled but Smith’s second and a third goal from on-loan Reece Wabara made it 3-1 after 48 minutes.

Joe Allen’s deflected volley with 10 minutes left gave Liverpool hope but, despite relentless pressure, they could not find another with Steven Gerrard rattling the crossbar from long range.

“There are a lot of emotions at the minute. I am very proud and I am very pleased for the fans as it has been a long time without success for them,” Oldham manager Paul Dickov told BBC Radio 5 live.

“I was a lucky boy to have the playing career I had but this is the top moment.”

Former Scotland striker Dickov has cut his managerial teeth at Oldham since 2010 after a much travelled playing career that included stints with Manchester City, Leicester City and Blackburn Rovers among a host of clubs.

Hard times
Oldham have faded into the obscurity of the lower divisions since relegation from the Premier League in 1994, including a period in administration.

Just a month earlier they had been within a whisker of reaching the FA Cup final, conceding a goal in the final minute of extra time against Manchester United in the semi-final at Wembley to be taken to a replay.

United won that 4-1 and Oldham have been left to reflect on what might have been ever since.

Leeds have also fallen on hard times in recent years but rekindled happier days by sinking Spurs at Elland Road.

Well-taken goals from Luke Varney and Ross McCormack put Leeds, Cup winners in 1972, in control with Clint Dempsey’s header not enough to save the Londoners.

Chelsea, FA Cup winners in four of the last six seasons, were grateful of another chance after Torres swept home on 83 minutes to peg back Brentford who had twice led at Griffin Park.

Having missed out on one Wembley appearance after losing over two legs to Swansea City in the Capital One (League) Cup semi-finals, Chelsea were in trouble when Harry Forrester’s 73rd-minute penalty put the modest west London side 2-1 up.

But Torres, a pale shadow of the striker that Chelsea paid a British transfer record fee of 50 million pounds for in 2011, kept the Cup holders in the competition with a precise finish.

“I was pleased with the reaction of the players, we were much better in the second half,” Chelsea interim manager Rafael Benitez told reporters.

“We knew what Brentford were capable of and they did it well, so credit to them, but we need to do our job in the replay.”

Brentford went ahead through Marcello Trotta in the first half before Brazilian Oscar equalised 10 minutes into the second half.

The winners of the replay will play away at second-tier Middlesbrough.