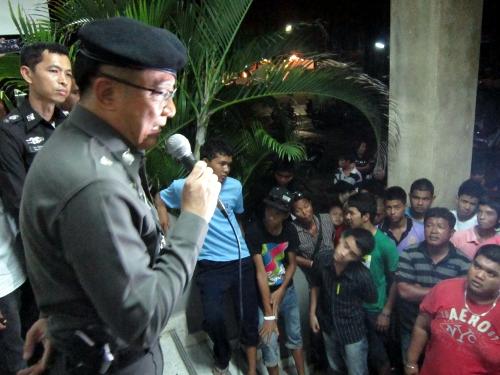 PHUKET: About 200 angry Phuket villagers Thursday night demanded that the Kamala police officer who allegedly pistol whipped a teenager in an angry mob be immediately transferred.

The boy was allegedly struck across the face by the officer as he joined other teenagers in beating an alleged bag snatcher, who had just been put under “citizen arrests”.

At about 9pm, Phuket Provincial Police Commander Choti Chavalviwat confronted the crowd and ensured them that an investigation into the matter would be set in motion. However, on Saturday morning Maj Gen Choti told the Phuket Gazette that the matter had already been settled.

“It was all a misunderstanding on Thursday night. Kamala villagers gathered at the police station because they believed that one of the officers had used excessive force when protecting the alleged bag snatchers from the angry mob of teenagers,” Gen Choti told the Gazette this morning.

Police were chasing down a pair of the snatchers that had fled from Patong to Kamala, when they were helped by a group of teenagers, who surrounded the thieves, he explained.

“However, the teenagers started to beat the thieves instead of just apprehending them. Police did their best to control the situation,” he said.

“There were no guns fired,” he added.

Gen Choti ensured the Gazette this morning that an understanding was reached between the teenagers’ parents and the police.