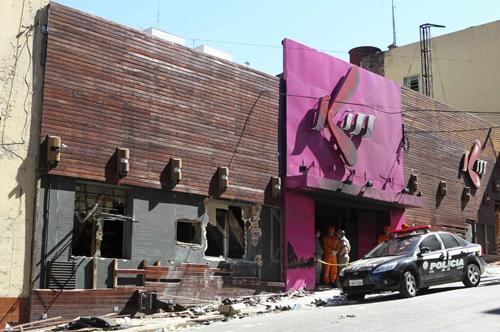 The blaze in the university town of Santa Maria was ignited by sparks from pyrotechnics used by the band for visual effects. They set fire to soundproofing on the ceiling and the club rapidly filled with toxic smoke, local fire officials said.

Most of those who died were suffocated by fumes, fire brigade Sergeant Robson Muller told Reuters. Others were crushed in the stampede.

“Smoke filled the place instantly, the heat became unbearable,” survivor Murilo Tiescher, a medical student, told GloboNews TV. “People could not find the only exit. They went to the toilet thinking it was the exit and many died there.”

Fire officials said at least one exit was locked and that club bouncers, who at first thought those fleeing were trying to skip out on bar tabs, initially blocked patrons from leaving. The security staff relented only when they saw flames engulfing the ceiling.

The tragedy, in a packed venue in one of Brazil’s most prosperous states, comes as the country scrambles to improve safety, security and logistical shortfalls ahead of the 2014 World Cup football tournament and the 2016 Olympics, both intended to showcase the economic advances and first-world ambitions of Latin America’s largest nation.

In Santa Maria, a city of more than 275,000 people, rescue workers and weary officials wept alongside family and friends of the victims at a local gymnasium being used as a makeshift morgue.

“It’s the saddest, saddest day of my life,” said Neusa Soares, the mother of one of those killed, 22-year-old Viviane Tolio Soares. “I never thought I would have to live to see my girl go away.”

President Dilma Rousseff cut short an official visit to Chile and flew to Santa Maria, where she wept as she spoke to relatives of the victims at the gym.

“All I can say at the moment is that my feelings are of deep sorrow,” said Rousseff, who began her political career in Rio Grande do Sul, the state where the fire occurred.

“We ran into a barrier of the dead at the exit,” Colonel Guido Pedroso de Melo, commander of the fire brigade in Rio Grande do Sul, said of the scene that firefighters found on arrival. “We had to clear a path to get to the rest of those who were inside.”

Officials said more than 1,000 people may have been in the club, possibly exceeding its legal capacity. Though Internet postings about the venue suggested as many as 2,000 people at times have crammed into the club, Pedroso de Melo said no more than half that should have been inside.

He said the club was authorized to be open but its permit was in the process of being renewed.

However, Pedroso de Melo did point to several egregious safety violations – from the flare that went off during the show to the locked door that kept people from leaving.

The club’s management said in a statement that its staff was trained and prepared to deal with any emergency. It said it would help authorities with their investigation.

World News: Women in US, France and India make the headlines