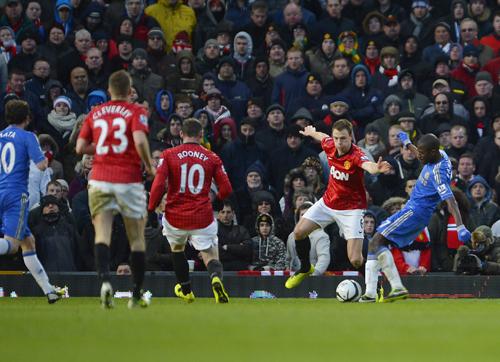 PHUKET: Chelsea came from two goals down at Manchester United to draw 2-2 in a thrilling FA Cup quarter-final yesterday that capped a bad week for the Premier League leaders who were knocked out of the Champions League on Tuesday.

Bayern Munich maintained their title push with a 3-2 win over Fortuna Dusseldorf to go 20 points clear at the top of the Bundesliga and Juventus moved nine clear in Serie A with a 1-0 win over Catania.

Manchester United and Chelsea drew 2-2 as the quarter-finals of the FA Cup took the spotlight and there was a thrilling Premier League match at Anfield where Liverpool came from behind to beat Tottenham Hotspur 3-2.

United raced into an early 2-0 lead before holders Chelsea fought back to draw at Old Trafford and force a replay.

The winners of that game will face Manchester City in one semi-final at Wembley after the Premier League champions beat Barnsley 5-0 on Saturday.

Wigan Athletic beat Everton 3-0 in their quarter-final to reach the semis for the first time where they will face either Millwall or Blackburn Rovers.

Queens Park Rangers boosted their Premier League survival hopes with a 3-1 win over Sunderland, although they stay bottom of the table.

Barcelona stretched their lead at the top of La Liga to 13 points when Lionel Messi scored for a world record 17th straight league game in a 2-0 victory at bottom side Deportivo La Coruna on Saturday.

Atletico Madrid lost their perfect home record when they were beaten 1-0 by Real Sociedad yesterday and city rivals Real leapfrogged them into second after Cristiano Ronaldo scored twice in a 2-1 success at struggling Celta Vigo.

Barca fielded a weakened side against Depor with an eye on tomorrow’s Champions League game at home to AC Milan and Messi came off the bench to score with a delightful late chip after Alexis Sanchez had put Barca ahead in the first half.

Barca said Messi had surpassed Polish forward Teodor Pewterek, who scored in 16 straight outings for Ruch Chorzow at the end of the 1930s.

Bayern Munich’s record-breaking season showed no signs of abating as they twice came from a goal down to beat promoted Fortuna Dusseldorf 3-2 and set a Bundesliga record for the best start after a winter break with eight straight league victories.

Goals from Franck Ribery in the 73rd and Jerome Boateng four minutes from time turned the game in favour of the Bavarians, who have now won all ten of their matches in all competitions this year.

Bayern are 20 points clear at the top of the table and with nine matches to play, they only need only three more wins to take the title.

Champions Borussia Dortmund suffered a renewed setback in the league, slumping to a 2-1 defeat in their Ruhr valley derby against Schalke 04 to stay on 46 points but hold on to second place after Bayer Leverkusen remained a point behind following a 1-0 defeat at Mainz 05.

Juventus extended their lead at the top of Serie A to nine points when substitute Emanuele Giaccherini scored in stoppage time to give them a 1-0 win over Catania.

Third-placed AC Milan won 2-0 at Genoa, leaving them only two points behind Napoli.

Amauri scored a hat-trick in the last 15 minutes as Parma beat Torino 4-1 and Colombian Victor Ibarbo also scored three goals in Cagliari’s 3-1 win over Sampdoria, played behind closed doors because of problems at the Is Arenas stadium.

Zlatan Ibrahimovic scored his 23rd and 24th league goals to help Paris St Germain move four points clear of Olympique Lyon at the top of the table with a 2-1 victory at home over bottom club Nancy.

Lyon were held to a goalless home draw by third-placed Olympique Marseille, who have 50 points.

St Etienne, fourth on goal difference with 48 points, recovered twice from a goal down to draw 2-2 at Stade Rennes.

Ajax Amsterdam enjoyed a 3-0 home win against PEC Zwolle to go top of the Dutch league as PSV Eindhoven dropped to second after slumping to a 2-1 defeat at Heerenveen.

Ajax have 54 points after 26 matches, while PSV are one behind and level on points with Feyenoord, who beat Roda JC Kerkrade 1-0 thanks to Graziano Pelle’s 20th of the season.

Benfica thrashed Gil Vicente 5-0 at home to maintain their slender two-point lead over Porto at the top of the Portuguese Premier League.

Northern rivals Porto kept up the chase with a morale-boosting 2-0 win over Estoril ahead of their Champions League last-16, second-leg match at Malaga on Wednesday.