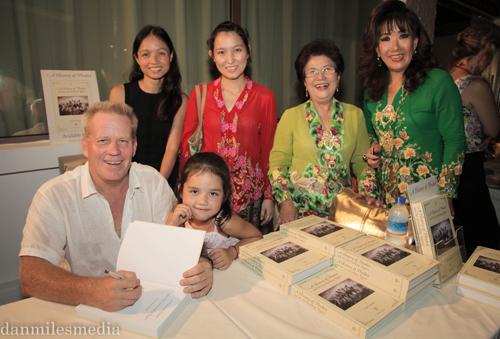 PHUKET: It was standing room only as more than 250 people crammed into the auditorium next to Les Anges bakery at Royal Phuket Marina (RPM) yesterday evening for the launch of Colin Mackay’s potentially seminal work,”A History of Phuket and the Surrounding Region”.

More than six years in the making, the book references more than 800 texts detailing the arrival of man onto the Malay Peninsula and the developments thereafter that produced what is known today as the tourist haven isle of Phuket.

With the event organized by the American Chamber of Commerce (AMCHAM) Phuket Chapter, Bill Barnett of C9Hotelworks introduced the speakers, beginning with respected local historian Assistant Professor Pranee Sakulpipatana, who generously donated many of her prized historical photographs for use in the book.

In true Phuket style, Prof Pranee delivered pictorial and narrative descriptions of Phuket’s yesteryear with tales recounted down the generations by her forefathers, stories annotated with bare facts and punctuated with comical notes that had the audience repeatedly breaking out in laughter.

Mr Mackay, known to nearly everyone in the room for the Thailand and Phuket specific books he has written over the years, took to the podium next, thanking all present, most notably those who contributed deeply to the production of the book.

Special thanks went to Prof Pranee for her “outstanding energy and enthusiasm” and to Royal Phuket Marina’s Gulu Lalvani for providing the venue to host the event.

Mr Mackay, originally from Tanzania, travelled around the world to gather information for the book, collating more than 1,000 quotes from historical figures across three millennia – all about Phuket.

Noted top among his inspirations for embarking on such an epic research journey was the fact that Phuket, an island that attracts millions of visitors from around the globe year after year, has been unique in its failure to offer these visitors any coherent, detailed description of its past through museums or other establishments.

“There is a symbiotic relationship between tourism and history. Major tourist destinations around the world tell visitors about their past. Phuket has been unable to do that,” he said.

Also lacking has been any single comprehensive publication focused purely on Phuket’s history. Mr Mackay noted that previous attempts to chronicle the island’s past were made in 1905 by an Italian police chief and again in 1985 by a Thai.

His book, the third focusing on Phuket’s history, is by far the most comprehensive due to internet access to vast amounts of information unavailable to his predecessors.

“I welcome all comments and criticisms of any facts in the book. It all provides a better forum to define Phuket’s history,” Mr Mackay said.

“I hope this book starts something that Thais and foreigners can work on together. Phuket has an amazing history.”