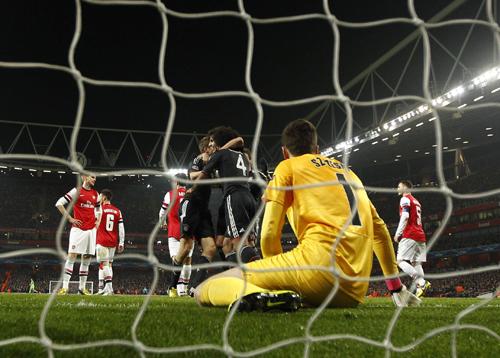 A clinical early strike from Kroos opened the scoring and when Mueller made it 2-0 midway through the first half the visiting fans were already in party mood.

Lukas Podolski scored against his old club as Arsenal battled back after the break but Mandzukic bundled in a third Bayern goal in the 77th to seal their first ever win in London.

The runaway Bundesliga leaders, trying to make amends for a heartbreaking shootout loss to Chelsea in last year’s final, toyed with Arsenal for 45 minutes and, though given a real scrap after that, are overwhelming favorites to reach the last eight.

Arsene Wenger’s side began positively with Santi Cazorla and Theo Walcott advancing deep into Bayern territory but it took the visitors seven minutes to stop the Gunners in their tracks.

Mueller, a constant menace down the right flank, was allowed time to cross and his scuffed delivery wrong-footed Arsenal’s defense and fell perfectly for Kroos to swivel and thump a first-time shot into the turf and past keeper Wojciech Szczesny.

Oozing confidence after an 18-match unbeaten sequence dating back to October, Bayern sensed Arsenal’s confidence was fragile and went about hammering home their superiority.

It was no surprise when the Germans doubled their advantage after 21 minutes when Daniel Van Buyten’s glancing header from a corner was blocked on the line by Szczesny but the ball popped up for Mueller to flick it into the unguarded net.

Arsenal frustration
Bayern looked capable of putting the tie to bed before halftime and almost did so moments before the break when Mandzukic rose majestically to meet Philipp Lahm’s cross but placed his powerful header agonizingly wide.

Arsenal’s frustration resulted in first-half bookings for Bacary Sagna, Thomas Vermaelen and Mikel Arteta while Bayern’s Bastian Schweinsteiger was yellow-carded for kicking the ball away and will be ruled out of the return leg in Bavaria.

Schweinsteiger’s moment of ill-discipline looked irrelevant with his side so dominant but the hosts responded after the interval to try to make the second leg more than a formality.

It was the first goal conceded by Bayern this year and rattled the visitors as the home crowd sensed that maybe all was not lost amid memories of Arsenal’s 2-2 draw with Barcelona in 2010 when they also trailed 2-0.

Arsenal substitute Olivier Giroud nearly equalized with his first touch after joining the fray with 20 minutes left but his sweetly-struck shot from Walcott’s cross went straight at Neuer.

The revival was cut short after 77 minutes when Bayern counter-attacked in devastating fashion and Lahm’s skidding cross spun up and in off Bayern’s Croatia striker Mandzukic.

Arsenal huffed and puffed looking for another reply but Bayern were better in every department and Arsenal were booed at the final whistle, just like on Saturday in their FA Cup defeat by Blackburn Rovers, as their season threatened to unravel.

German tourist to be flown home for neurological treatment

Phuket is set to get its own version of the popular game MONOPOLY and its creators want your help with ideas for the specialised tokens. ‘MONOPOLY: Phuket Edition’ was announced last month which will see the street art on the board game replaced with that of famous places around Thailand’s famous tourist destination. Such art will include beaches, hotels, shops, markets and other popular attractions.

Jennifer Lau from Winning Moves UK, is producing the game under official license from Monopoly brand owners, Hasbro. Lau says the tokens will feature a holiday theme. The token’s departure from the original theme of wheelbarrows, boots, iron, and thimbles as well as popular sports cars and hats.

“We have had a wealth of emails and suggestions coming in for Phuket, so thank you for each and every single one of them! We are taking them all into consideration whilst putting together the design of the game.”

“We wanted to change the tokens so that they would be more suitable for an island like Phuket, where so many people like to go on holiday to.”

“There will be six themed tokens that replace the original and we want to hear your suggestions for what these tokens should be!”

Bangkok has already been featured in the Monopoly game as it came out for purchase back in 2018.

Phuket is rehearsing procedures to ready themselves for the Covid‐19 vaccine administration green light. A rehearsal at Vachira Hospital’s Lan Muang Khao open area was held late yesterday to iron out any kinks in the administration process. Phuket Vice Governor Pichet Panapong watched over the procedures along with other health officials.

“The government recognises the importance of the affected areas of the economy where the epidemic situation of COVID-19 must be stopped and has allocated the COVID-19 vaccine to Phuket Province to build herd immunity, restore the economy, return a smile to Thailand.”

“We are preparing to COVID-19 mass vaccination to build confidence among the people that they will receive a quality, safe vaccine and to receive follow-up care after it has been administered.”

Pichet says Phuket’s first target groups to receive the vaccine include medical and public health personnel, with others on the frontlines to come next.

“People with severe neurological conditions and pregnant women should be wary of taking the vaccine, as well as women who are breastfeeding and people with immunodeficiency.”

The procedure to get vaccinated starts by recipients undergoing screening by having their temperatures taken, and then sanitising their hands before entering the administration area. Then, they will move their way through a series of steps, detailed below:

Step 3: Pass the screening process by have their medical history and risk assessment recorded and then signing a consent to receive the vaccine

Step 6: Rest for 30 minutes, while being observed for symptoms. Then scan the official Line account “หมอพร้อม” (“Doctor Ready”)

Pichet says health workers will follow up with vaccine recipients after 1,7, and 30 days from being vaccinated to monitor any adverse reactions.

The drunk, off-duty police officer in Phuket who has caught on camera shooting and beating a noodle vendor on Bangla Road is now facing attempted murder charges as well as charges of carrying a firearm in public without a necessary reason and firing a weapon in a public area. The commander of the Phuket police station said he ordered investigators to prosecute the officer Pornthep Channarong with every criminal charge that can be applied.

The officer had gotten into an altercation just before dawn yesterday and shot a young vendor who was walking by. Surveillance camera footage show the 25 year old suddenly falling to the ground after being shot. The officer walks up and shoots the vendor at a close range, but it appears the second shot did not hit the vendor. The officer also slapped the vendor in the face, picked him up and shoved him over, and then kicked him as he lay on the ground.

The vendor has a 4 year old daughter and 3 month old son. His wife says normally he works as a motorbike driver, but he was helping his mother selling noodles. He was shot while he was walking back from collecting a noodle bowl, she says. The vendor is in critical condition and being cared for at Vachira Phuket Hospital’s intensive care unit. He’s in need of Type B blood.

“For his condition, the doctor told me that the bullet went through his lung. He lost a lot of blood. We need a lot of Type B blood for him.”

A disciplinary investigation into the incident was launched by police and Pornthep was officially dismissed from the Royal Thai Police force. Region 8 Police Commander Kitrat Panpetch says the incident does not reflect the police force in Phuket.

“The incident was caused by an officer who did something wrong that our organisation does not want. We are a big organisation with more than 200,000 officers under our control. Our officers are not all bad like this.”

Phuket Provincial Police Commander Pornsak Nuannu says he has reminded the police chiefs across the island to discuss reasons for carrying firearms in public.

“Carrying firearms is to prevent any type of crime that may happen, not to commit a crime by themselves like this incident. If I see any police doing such a thing, I will decisively proceed in terms of both officer discipline and criminal charges.”