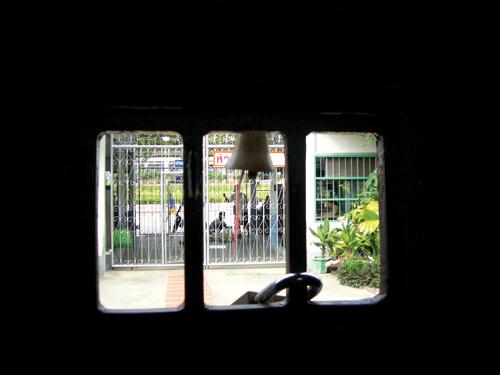 PHUKET: Looking exhausted, Lee Aldhouse cut a lonely figure in his faded prison-issue overalls, surrounded by about 20 Thai inmates. He waited for the signal from the prison guard controlling the communication between visitors and inmates – a telephone – before picking up his receiver.

The first thing he said was, “I cannot talk about my impending court case, but we can discuss prison life.”

Aldhouse faces charges of premeditated murder under Section 288 of the Thai Criminal Code for the slaying of former US Marine Dashawn Longfellow in 2010. The penalty for that charge is death or a term of imprisonment of 15 to 20 years, but the death penalty will not be considered as he has already confessed to stabbing Mr Longfellow.

Aldhouse has been in Phuket Provincial Prison since December last year, when he became the first person in over 100 years to be extradited from England to Thailand (click here for story). He fled Thailand on August 17, 2010, three days after the murder of 23-year-old Longfellow, and was arrested upon his arrival at Heathrow Airport in London on an unrelated charge.

Before the one-on-one interview with Aldhouse this week, a prison official told the Phuket Gazette that he was starting to adjust to life behind bars and had visits from friends every two weeks.

Speaking softly and calmly through the telephone with his gaze fixed forward, Aldhouse talked about his prison life. His expression changed only when the conversation turned to prison guards. He became uncomfortable, rubbing his head, neck and face compulsively and glancing around the room before looking straight on again.

Aldhouse entered Phuket prison in shackles and chains and admits that he felt unsafe for the first few months. The tough guy persona he had spent years cultivating during his kickboxing career as “The Pitbull” worked against him in jail. He believes that when he fell ill, he wasn’t allowed to get the medical treatment he felt he needed because of his image.

“The guards saw me as a tough Muay Thai boxer,” he said.

Trying to come to grips with what was happening around him, he would take notes about daily life and the incidents that occurred in prison. This constant note-taking was a poignant reminder of his new life and what came with it – causing him great stress. Once he stopped chronicling everything that happened to him, he began to feel more at ease and slowly adjusted to his new surroundings.

“I have sort of acclimatized to life in prison. It’s not a good thing, but I had to do it to get by with day-to-day life.”

Aldhouse, originally from Birmingham, helps to pass his time in jail by training four Thai inmates in amateur boxing.

“I was asked to do this only because of my fighting background and I have trained the boxers since day one here,” he said.

The boxers don’t have a gym as such, but they do have one punching bag and gloves. Training the boxers keeps Aldhouse busy and he spoke with a sense of pride about the tournament his boxers competed in on April 25 at Surat Thani Provincial Prison. Aldhouse doesn’t box, but he enjoys the hands-on aspect of training the inmates.

Aldhouse does his best to keep to himself in a cell that houses 33 other inmates, explaining in part why he looks so exhausted.

“I can’t sleep at night because the guards ring a bell every 15 minutes, from 8pm to 6am every night.”

Phuket Prison Chief Rapin Nichanon explained to the Gazette that the bells are standard procedure at prisons across Thailand.

“The guards ring the bells hourly from 9pm to 6am to let their supervisor know that all is well. It takes about three minutes for all guards to ring in. This system is used in every prison in Thailand,” he said.

The only contact Aldhouse has with the outside world is when his girlfriend and a few friends he made before he fled the country in 2010 come to visit him.

Aldhouse doesn’t send any mail to friends or relatives on the outside as he believes the guards will read it. The mere mention of the guards makes him squirm in his seat, and again he begins to rub his neck and his head.

“The guards have refused to give me my medication for anxiety for the last six weeks,” he said.

“Prisoners are allowed medicine only if it has been prescribed by a doctor,” Prison Chief Rapin explained.

“They cannot bring their own medicine into the prison and they cannot receive any medicine brought by relatives or friends without presenting to us a prescription from a doctor in Thailand,” he said.

“Mr Aldhouse does not have a doctor’s prescription and friends who visited him tried to bring him some medicine a few times. They told us it was for his illness, but we did not allow this because we are not sure if it is genuine medicine or drugs or other dangerous pills,” he added.

Regardless, Chief Rapin called a doctor from Vachira Phuket Hospital to examine Aldhouse and confirm that medication was required.

“The doctor ordered an initial course of medication, but after that ran out Mr Aldhouse said he wanted more. The doctor, however, considers further medication unnecessary,” he said.

Seen through the glass, Aldhouse looked like a person who is starting to accept his fate and no longer sees the point in trying to cause a fuss.

He doesn’t like the way the media have portrayed him and he doesn’t understand why the press has chosen to show him in a bad light. Stories surfaced of Aldhouse smashing a flyscreen, fighting with other prisoners and making unrealistic demands.

“I don’t want to be portrayed as an animal in the media. The stories about food and special treatment are all lies.”

He was at a loss to understand why people would make something up about him and he couldn’t think of a reason when pushed on the subject. He gestured to the other Thai inmates in the room asking, “Why would I get special meals over them?”

Aldhouse is not due back in court again until August 10, and now that he seems to be coping with life in prison he didn’t seem keen on being moved to a prison in Bangkok after his trial.

“I want to stay here… I don’t want to go to a new prison and have to start from the beginning in a new prison environment,” he said.

Phuket Prison was built 115 years ago and meant to house 800 prisoners, but today is home to more than 2,000 inmates.

As the allotted 15 minutes of visiting time drew to a close, Aldhouse asked if the Gazette would come back again and see him in a month or two, but not at 1pm on a Thursday, as that is when he holds a training session with his boxers.

And with that, the phone line was cut off and the inmates filed through the single door back into the belly of the prison.

Topless Russians and other illegals scooped up in Phuket nightclub raid