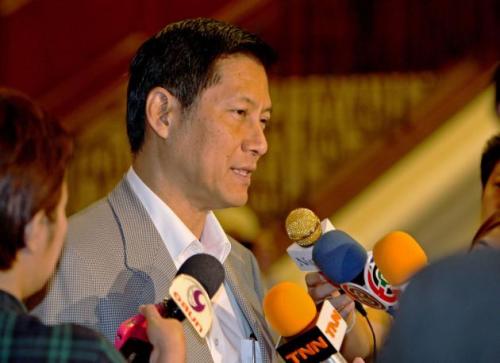 
NSC rejects BRN demands at peace talks
Phuket Gazette
PHUKET: The Thai authorities on Monday rejected demands by the southern Muslim separatists in their second round of talks, but both sides agreed to hold another meeting on June 13.

National Security Council secretary general Lt-General Paradorn Pattanatabut, who headed the Thai side in the dialogue with the Barisan Revolusi Nasional (BRN), said that the demands raised by the group’s liaison officer Hasan Taib were turned down by the authorities.

Paradorn, speaking to reporters after the meeting that lasted almost seven hours, said the Thai authorities would not agree whether to consider the demands by the BRN.

The five proposals were made on Sunday via a YouTube video message by key BRN leaders.

In the YouTube clip, Taib and another BRN leader Abdul Karim Khalib demanded that:

– Malaysia’s role be upgraded to mediator in the ongoing peace dialogue, from merely facilitator as is currently the case,

– Only BRN-represented members take part in the process,

– Members of the Organisation of Islamic Cooperation or NGOs observe the next round of meetings,

– All suspects detained for terror attacks be released and all warrants revoked, and

– The BRN be recognised wholly as a liberator, not a separatist organisation.

Paradorn said on Monday that the Malaysian authorities insisted that they would still act as facilitator.

He also said the Thai side asked the BRN leaders taking part in the talk to make sure that their group’s insurgency agents would end their violent attacks in the southern border region.

Both sides agreed to meet again on June 13, according to Paradorn.

PHUKET: Prime Minister Yingluck Shinawatra yesterday heated up the ongoing confrontation between the government – backed by its MPs and supporters – and the Constitutional Court. In an unprecedented action, she assailed independent agencies, accusing them of abusing their power.

The PM has never publicly made such strong remarks against coup leaders or independent agencies.

Yingluck said Thailand headed downwards after her brother, ex-PM Thaksin Shinawatra, was overthrown in a military coup in September 2006.

“Thailand lost track and the people spent almost a decade regaining their democratic freedom,” she said in her speech at the 7th Ministerial Conference of the Community of Democracies in Ulan Bator, Mongolia.

The prime minister said she had raised the matter for the benefit of the country, and not just her family.

“Many who don’t know me say, ‘Why complain?’ It is a normal process that governments come and go. And if my family and I were the only ones suffering, I might just let it be. But it is not,” Yingluck said.

“Thailand suffered a setback and lost international credibility. Rule of law in the country was destroyed. Projects and programmes started by my brother’s government that came from the people’s wishes were removed. The people felt their rights and liberties were wrongly taken away,” she said. Yingluck also said that despite her political party’s election victory in 2011, “it is clear that elements of the anti-democratic regime still exist. The new Constitution, drafted under the post-coup government, put in mechanisms to restrict democracy.”

“She should clearly distinguish her roles as a sister and the prime minister. She may feel sorry for her brother being overthrown from power, but that’s a personal matter. It is also not right to defend her brother, who is a fugitive wanted by the Thai authorities,” said Democrat Party chief Abhisit.

He said Yingluck omitted the fact that Thaksin violated the law and she failed to mention the good points of the post-coup 2007 Constitution. He added that the PM also tried to mislead people about problems in Thailand, including the provocation by protesters rallying in front of the Constitutional Court office that were spreading inaccurate information.

Meanwhile, tension rose at the Constitutional Court yesterday as a group of demonstrators appeared in support of the court’s judges, in opposition to a red-shirt group that has been rallying for nine consecutive days demanding the judges resign.

About 100 members of the Motherland Protection Organisation and Network came to the Constitutional Court to provide moral support to the nine judges.

The group arrived at the court from the back of the Ratchaburi Direkrit Building, which is the office of the Constitutional Court inside the Government Complex, to avoid conflict with the red-shirt group protesting against the court in front of the complex. Wirat read from the statement that his group wanted to encourage the nine judges to continue working to defend justice so the community could bank on them.

The Pro-Democracy People’s Radio Group, on the other hand, insisted the nine judges must resign immediately. The group, led by Pongpisit Kongsena, has been camping in front of Government Complex for nine days after the court agreed to review the constitutionality of the bill to amend Article 68. The amendment would prohibit the Constitutional Court from receiving petitions from the public directly, requiring petitions to be channelled through the attorney-general.

Pongpisit said the protest would continue until the nine judges resigned. He said his group would today campaign for Thais to wear black shirts with the words “shameful judges” printed on them.

In a related development, Pol Maj-General Sangiam Samranrat, an official attached to the PM’s Office, filed a complaint with the Crime Suppression Division, alleging the nine judges were causing a public disturbance.

Khamronwit said fact-finding committees were set to look into the two allegations within three days.