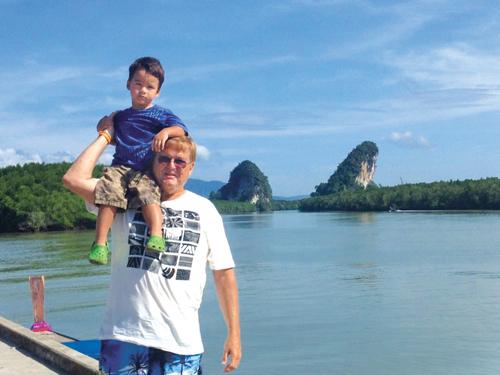 PHUKET: This week’s column marks the end of my eleventh year as a Phuket Gazette columnist and, as of the end of this month, I’m retiring in Thailand – something I probably should’ve done years ago. Just too many irons in the fire, and my family has had to put up with a lot. Although I’m hanging up my keyboard here in Thailand, the Live Wire spirit lives on. Let me explain.

Although I’m officially retiring as a newspaper columnist, my interest in most things computer-related remains much alive and I’m happy to answer questions whenever I can. I will continue to monitor computer forums, including thephuketforum.net and look forward to remaining in contact with Gazette readers there. Just post questions under “Start a Topic” in the TECH category and I’ll do my best to join the conversation and throw my views into the mix.

More than that, I’ve convinced a friend of mine, who lives overseas but visits Phuket frequently, that it’s in his best interests to keep the Live Wire concept going. How else will people in Phuket be able to stay informed about the considerable computer shenanigans going on all over our favorite desert isle?

Here’s the deal: you ask questions and he’ll answer them. He’ll spread his wisdom and experience on thephuketforum.net, so you can come up with comments, contrary opinions, and brilliant insights, using your real name or a handle if you’d prefer to remain anonymous. I’ll chime in as time permits. Then, every week, the editors at the Gazette will scrape together a selection of the most cogent questions and answers posted in the forum, and publish them here in the Gazette, in the new, improved – and decidedly plugged-in – Live Wire column.

If you’re accustomed to emailing me with your questions – I get at least a couple of inquiries a day from Phuket computer folks – you can go straight to the TECH forum, post your questions, and get answers from the assembled cognoscenti far faster than I can keep up. More than that, you can get opinions from people who have different perspectives than mine.

Yes, I’m adamant about using “genuine” software. I like Windows 7; hate Windows 8 and XP; and wouldn’t use anything but Microsoft Security Essentials for Windows’ antivirus. I use Gmail and Google Apps; love my iPad, Kindle and Samsung Note II; and covet my wife’s iPhone 4. Other folks on the forum won’t agree. That’s a good sign!

Moreover, I don’t know anything about Mac OS X, and precious little about iOS. But, “Mr Live Wire” knows a little bit more. Opening up a wide-ranging forum, where you can post your own questions, and folks can chime in with answers, expands Live Wire’s reach tremendously.

I moved to Phuket more than twelve years ago (expecting to retire!) and was more than a little excited about the websites I saw that explained how Phuket was transforming itself into an “IT City”. A funny thing happened along the way. We never got an official IT City but, Phuket now has an enormous number of highly talented, very experienced computer people, with all sorts of backgrounds, from corporate security to social media to open source. Phuketians cover every branch of hardware, software, and hucksterware you can imagine. We really do have an IT City here, it’s just that almost all of it operates under the radar.

It’s been interesting, informative – and entertaining – getting to know you folks.

I started writing for the Gazette in no small part because I was convinced that somebody, somewhere, knew everything there was to know about getting a decent internet connection in Phuket. I never did find that guru. Through many fits and starts, several failed companies, and technologies that fell over just like stunned elephants, we’ve emerged with pretty decent internet capabilities. Nothing worth writing home about, perhaps, but usable. I think of all the changes I’ve seen here in Phuket, improved internet access is the most important, most widely beneficial one – with more and better hospitals and schools pulling a close second.

Don’t get me started about traffic or pollution, over-development, selectively enforced laws, corruption and personal safety. If you stick to looking at the internet, the story’s been a good one.

The computer industry itself has changed so much since I moved here that I hardly recognize it. Twelve years ago we were all struggling with Windows XP, and only the real ‘bleeding edge’ mavericks used Macs. Now, Microsoft seems hell-bent on burying Windows, and enormously capable tablets and phones are filling in the gaps. We get all of that technology here (well, except for 4G) and it makes a big difference in my life – I bet it does in yours, too.

Several of you have asked about the bakery, the Sandwich Shoppes, and the future of our Sunday morning computer clinics. Here’s the abbreviated version.

My retiring in Thailand won’t bring any changes at all to Khun Woody’s Bakery. My wife, Khun Add, and her ace manager Khun Khan took over operation of the bakery in 2009. My official retirement only publicly reflects what happened, in fact, years ago. Add and Khan are starting a retail bakery shop directly across the street from the new Krung Thai Bank in Kathu. They’ll probably have a few computer clinics to kick it off, once the shop’s ready.

We’re looking for a new owner for the Sandwich Shoppe in Chalong. I anticipate the new owner will take the same approach – no changes at all, turnkey operation – and the Sunday morning computer clinics should continue there as they have for years.

The regular weekly computer clinic roundtables continue every Sunday morning, 10am at the Sandwich Shoppe, Chalong. If you have a Windows problem that needs to be solved, or a question about internet service in Phuket, drop by and ask one of the assembled gurus. It’s always free. Or click “Start a Topic” in the TECH section of thephuketforum.net. Sponsored by the Phuket Gazette and Khun Woody’s Sandwich Shoppes.

Look for Patong computer clinic announcements in the near future.

And don’t forget to follow the retired Woody on Twitter, @PhuketLiveWire, and “like” the pages at facebook.com/SandwichShoppe, facebook.com/phuketgazette and now Google+, or send him mail at Woody@KhunWoody.com.

Phuket In Focus: Dreaming in black and white