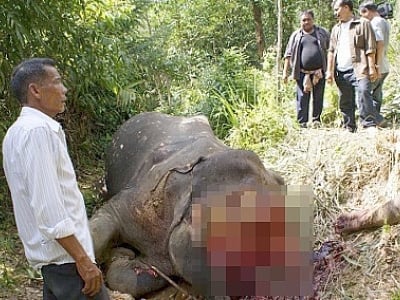 PHUKET: Livestock officials in Krabi are investigating the death of a male elephant found partially decapitated on a remote hilltop rubber plantation in Khao Khraam District yesterday afternoon, the Phuket Gazette has learned.

The discovery of the carcass was reported to the Gazette by Khao Khram tambon chief Karim Laklaeng at about 2pm yesterday.

[Reader discretion advised. Some readers may find the images of the carcass disturbing. To view, click here and here.]

It took a difficult ride in a four-wheel drive vehicle followed by a long hike through a rubber plantation to reach the carcass, which was partially dismembered.

The front of the head had been severed, evidently to remove the animal’s tusks.

Officials estimated that the elephant was about 40 years old. Based on the state of decomposition it probably died before dawn the same day, members of the group estimated.

The tip of its tail was also severed and there were deep wounds to the feet of its hind legs.

Among the party that made the initial examination of the carcass was Yamaad Wanramaan, assistant to the headman of village 5.

Mr Yamaad said he was notified of the carcass by rubber tappers working in the area. He feared the rotting carcass could contaminate the local water supply because the hilltop area is a water source for both Khao Khram and Khlong Hin subdistricts.

From initial questioning of local residents, Mr Yamaad said the elephant was probably used to drag logs over the hilly terrain. Deep wounds to its hind feet were probably the result of being struck by a totthi, a hook used my mahouts to control work elephants.

The elephant may have been worked to death by its owner and mahout, who then decided to remove a tusk to sell on the black market, he said.

Local residents said the animal only had one tusk, which was about a meter long, Mr Yamaat said.

The elephant’s owner and mahout had probably already left the area with the tusk, he added.

Wiboon Lerdwattnasombut, chief of the Krabi Livestock Office, told the Gazette that his office had to examine the carcass further to determine the exact cause of death.

After the examination is complete the carcass would be buried at the site, he said.

His officers also had to determine if the elephant had proper identification papers filed with his office.

If the Livestock Office is able to determine the identity of the animal and its owner, it would report the incident to the relevant authorities, he said.