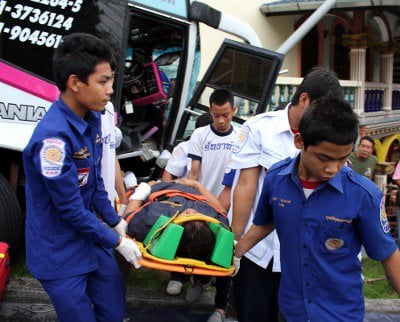 PHUKET: Wichean Tungjit, the 25-year-old Phuket tuk-tuk driver involved in this morning’s bus crash on Patong Hill, was diagnosed by doctors as having a mild concussion, but not a fractured skull, as was originally feared.

Mr Wichean was among the 10 people rushed to Patong Hospital after the accident, which happened at about 6:50am.

He suffered a head injury and was conscious, but staff at Patong Hospital feared he had a fractured skull from the impact.

As a precaution, Mr Wichean was transferred to Vachira Phuket Hospital in Phuket Town, where doctors in the neurology department have now confirmed that he is responding to stimuli, despite still suffering from a mild concussion.

He is now being kept at the hospital for observation.

The bus driver, whose name was confirmed as Chalerm Sri Moongkhun, 46, suffered injuries to his left arm and the back of his left foot.

Rittichai Srihamart, 14, was the youngest person injured. He suffered a gash on his right knee.

Investigating officer Lt Thanakrit Kiawyai of the Patong Police explained to the Phuket Gazette that the bus was one of three arriving from Bangkok bringing more than 100 Ministry of Labor officials for a two-day seminar in Phuket.

“They were heading to the Sea Pearl Resort where they are staying and attending a seminar that is scheduled to start tomorrow,” he said.

As the bus approached the final curve on its descent into Patong, it collided with a yellow tuk-tuk being driven by Mr Wichean before crashing into the front of the house belonging to Ms Sunisa Machom.

The curve, known locally as “Pla Ra Curve” is about 100 meters from Patong Temple.

“The tuk-tuk was heading toward Phuket Town. The bus driver swerved to avoid it, and crashed into the house,” said Lt Thanakrit.

Police are continuing their investigation into cause of the accident, he said.

The Ministry of Labor delegates are scheduled to return to Bangkok on Sunday, he added.