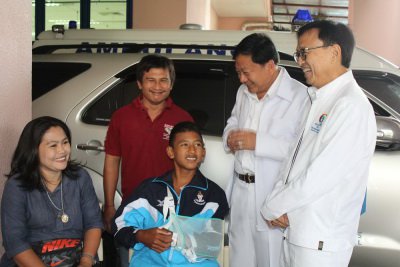 PHUKET: The young athlete injured in a motorbike accident that claimed the life of his teammate passenger was released from the Phuket Provincial Administration Organization (OrBorJor) Hospital yesterday.

Atthapong Noikhamsin, the 13-year-old boy who survived the accident in Rawai on Thursday morning was seen off from the hospital by Phuket Governor Tri Augkaradacha and OrBorJor President Paiboon Upatising.

Young Atthapong’s next stop is Klang Hospital in Bangkok for additional treatment to his arm.

“I am getting much better… [but] The doctor told me it will take about a year before I can play sports again,” Atthapong said.

“If I get the chance, I will be back in Phuket. I am very sorry about the accident. I was knocked unconscious and I can’t really remember what happened,” he said.

Atthapong’s parents, Wutthipong Noikhamsin and Sudawan Supramote, told the media they were thankful to all the agencies and government departments in Phuket for taking such good care of their son, with a special mention to the doctors and nurses at the hospital.

“Atthapong is getting better very quickly. He needs to recover more before he undergoes the operation to remove the metal supports from his arm,” his parents said.

After being wished well by Governor Tri and President Paiboon, Atthapong and his parents were taken by ambulance to Phuket International Airport to catch their flight to Bangkok.