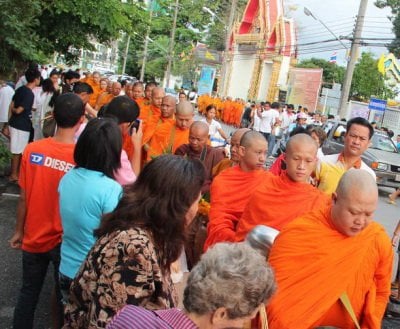 PHUKET: The sale and purchase of alcohol is banned in Phuket and throughout the country today to show respect for Visakha Bucha Day. Anyone found breaking the law can receive a prison sentence of up to six months, a 10,000-baht fine, or both.

“Anyone trying to get around the ban by playing on the word ‘day’ and selling alcohol after midnight risks being arrested if we catch them.”

“There are so many other days in the year to sell alcohol. Please don’t on this religious day,” Col Kittipong added.

The Acting Superintendent of Phuket City Police Station, Sakchai Limcharoen, also confirmed to the Gazette that the sale and purchase of alcohol is banned in Phuket Town and elsewhere throughout the province.

“As today is Visakha Bucha Day, I believe Thai people, alcohol retailers and outlets know that sales and purchases of alcohol are prohibited,” he said.

“I don’t think the law needs to be enforced by the police, as everyone knows it is right to mark today as special,” said Col Sakchai.