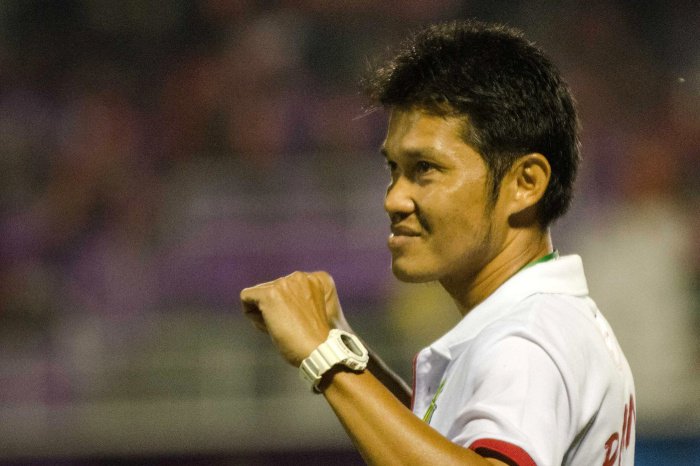 PHUKET: Phuket FC opened their 2015 campaign in the Yahama League 1 with a win over Trat FC last weekend: the “Ronins” defeated the “White Elephants” 0-1.

Wasan Samansin, sporting jersey number 11, scored the only goal of the match, beating the Trat goalkeeper in the 18th minute.

“We travelled so far, more than 1,000 kilometers, to come here, and that is what makes taking the three points from this match so deserving,” said Phuket FC’s Songyod “Coach Daeng” Klinseesuk.

“Every player tried their hardest for the win, just like they do at home. It was a well-fought victory.”

Goalscorer Wasan expressed this thanks for the praise he received for his efforts.

“It feels amazing that I scored. This was my first goal – and I am simply shocked. I must say thank you to my friends and my coach for their support and training,” he said.

Wasan, a defensive midfielder, has signed a contract extension that will keep him at the club until 2017, Phuket FC reported on its website this week.

“I’m delighted to have signed a new three-year contract. I need to show what my value is to them [Phuket FC], and to improve myself,” Wasan said.

Wasan, who played spells at Nonthaburi FC, Air Force Central FC, SCG Muangthong United and Assumption Thonburi, called on Phuket FC fans to give their support at Surakul Stadium in Phuket this Sunday, when the Ronins take on BBCU.

Kickoff is at 7pm.