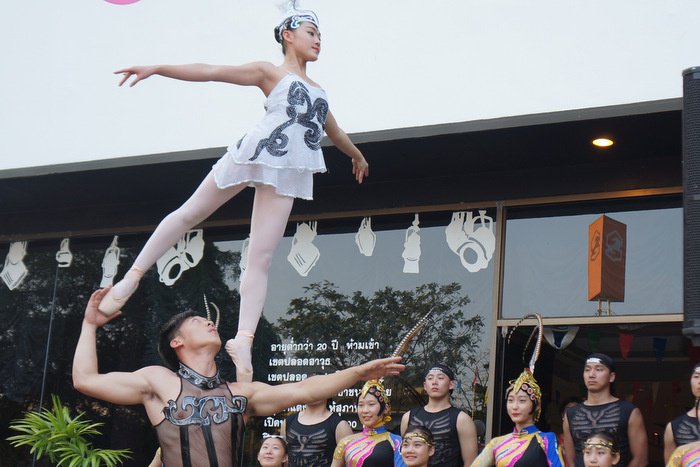 PHUKET: More than 50 performers from the legendary Chinese National Acrobatic Troupe, hailed as being among the best acrobats in the world, will be the highlight of celebrations for the Chinese New Year in Phuket tonight.

The festivities in Phuket Town will be held at Sanam Chai, opposite Phuket Provincial Hall, where the troupe will take to the stage at 7:40pm.

A handful of the acrobats performed on the doorsteps of the Phuket Garden Hotel on Tuesday, giving the media a taste of the spectacular show they are set to stun the audience with tonight.

Following the acrobats on stage will be Thai rock band Getsunova, who will perform until the event wraps up at about 10:15pm.

As is tradition with the Chinese New Year festivities, Sanam Chai will be decorated in lucky red decor and feature a 10-meter tunnel full of lights and Chinese lanterns in which festival-goers can take photos.

Plenty of local foods will also be on offer, with at least 60 stalls serving up delicious delicacies for revellers.

Also known in China as the Spring Festival, this is a time of renewal, when houses, including family altars, are cleaned or rearranged; distant relatives come together for festive meals; and deceased relatives and ancestors are venerated through offerings of food and flowers.

“I am proud that this tradition remains in Phuket,” Governor Nisit Jansomwong said. “Chinese people came to Phuket a long time ago, resulting in the unique mix that has become Phuket’s cultural heritage.”

He added that he expected many tourists to join the event in Phuket Town.

“We will have officers on patrol to provide extra security and to help with traffic control,” he said.

“Everyone is invited to join the event. Have a happy Chinese New Year!”

Tonight’s entertainment at the fair includes concerts by the hugely popular Thai country music singer Luang Kai, as well as X R-Siam and Earn The Star, and a nang talung shadow puppet play by the Khai-nui troupe.

For the full program of entertainment at the Wat Chalong Fair, click here.