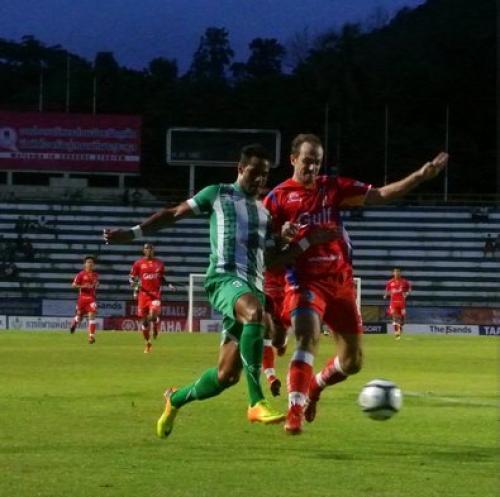 PHUKET: More than 3,000 Phuket FC fans endured yet another disappointing draw last Saturday evening at Surakul Stadium, watching their side come from behind a two-goal deficit to Ayuthaya FC to seize a single point in league play.

Ranked 7th in the 18-team league, Phuket dominated the opening exchanges, but were unable to put much of a threat on the Ancient Warriors’ keeper. It was the 16th-placed underdog visitors who would draw first blood in the 35th minute, however.

Capitalizing on a volley played in to the box, Ayuthaya’s Natthaphat Somsri in a reflex scored on the far post, past a diving Adisak Douangsri to ignite into cheer the hundred-or-so die-hards who’d bused it down from Thailand’s ancient capital.

The goal was Nattaphat’s 3rd of the season and the visitors would get their fill before the half was over, through Nigerian Midfielder Gafar Adefolarin Durosinmi, who on a counter attack, found the end of a well-placed through ball, timing his mili-second of a touch just right to beat a stretched Phuket defense. That goal was Durosinmi’s fifth.

A motivational half-time pep talk from Coach Teco must have sparked something for the home team, who came out playing with much more spirit and determination than the first half.

Following a few scuffles on the pitch, Cristian Alex was awarded a free kick from 59 minutes, and although Ayuthaya’s keeper got a hand on the direct shot, the high-velocity strike was clearly fated for the back of the net, prompting the Brazilian international to go on to celebrate his fourth for the club.

Phuket maintained attacking pressure with both Ludovick Takam and Geoffrey Doumeng coming off the bench to reinforce the offensive front.

The equalizer finally came through Eakartit Somjit on 74 minutes, who’d broken through a scrambling Ayuthaya back-line to beat the keeper from close range.

Despite multiple chances for Phuket to win the game, Ayuthaya held on to the final whistle, and Phuket would have to be content with yet another single point – their 14th of the season.

All YL1 results from the weekened.

*Trang FC had a break this week.

Phuket FC now have two away matches in the coming two weekends, against Si Racha on September 7 and Rayong FC on September 14. Their next home match will be on September 21 against Trat FC, before concluding the month with an away Southern Derby against the Krabi FC Andaman Eagles on September 28.

Poll: Who are the real victims of corruption in Phuket?