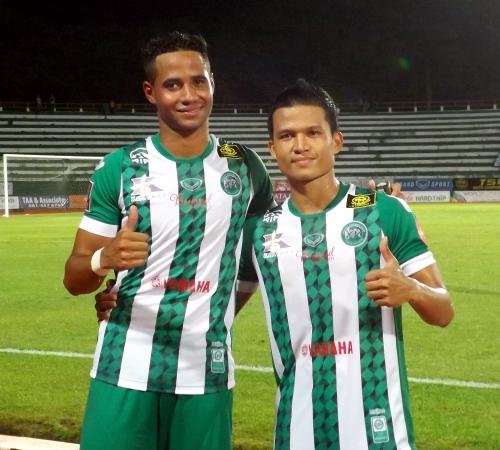 PHUKET: The Islanders last night won their first match in the last 50 days – and first at home for 112 days – beating Yamaha League One (YL1) rivals, Nakhon Pathom United 2-0 on a waterlogged pitch at Surakul Stadium in Phuket Town.

Marking the occasion, Phuket FC President Pamuke Achiriyachai at half time was presented flowers, a birthday cake and a framed picture of a famous temple, a gift from fans, but the real pinnacle of his delight came at the final whistle of the match.

Prior to last night, Phuket FC’s last league win was away to Rayong United on June 22, while the last time they claimed three points on home ground, was on April 21 to Khon Kaen.

The match’s 6:30pm kickoff followed an afternoon buildup of August Southern Thai downpours, which finally subsided about 20 minutes into play, leaving a dampened and slippery pitch throughout the first half.

Scoring from long range for Phuket was veteran Thai left-back, Tongchai Kuenkhunthod, whose shot – assisted by striker Luiz “Dudu” Purcino, who’d skillfully lured Nakhon Pathom’s keeper off his line before laying the ball off to Tongchai who’d evaded any markers – was deflected towards the far post and into the back of the net.

Making a positive impression on fans in his first match in charge, Phuket’s Brazilian coach Stefano Rodrigues, or “Coach Teco” rested Dudu and Ludovick Takam, in the second half putting in Giorgio Tsimakuridze and Cristan Alex, who displayed smooth chemistry with Thai striker Sukree E-tae on the front line.

Coach Teco’s tactical deployments soon bore fruit when Alex was awarded a free kick, near the left touch line. Nakhon Pathom’s keeper didn’t have a chance from the missile of a kick, a legendary goal that sent Phuket players, coaching staff and two thousand-odd fans erupting into celebration.

The contingent of visiting red-shirted Wild Boars’ fans, numbering about 100, sat in silence.

After the match, Coach Teco told the Gazette that he was very satisfied with the performance of the team, but more importantly, the resulting three points.

“Although we are still 8 points shy of 3rd place, we will focus on recovery and try to do the same in the coming matches – play good football, and get the [winning] result.”

Coach Teco admitted that the road ahead will not be easy, considering the narrow time window.

“I didn’t have much time to train with the team [one week], and now we don’t have any training before and in between the next four matches in two weeks.

“The difficult thing will be to keep everyone motivated and on target, as it’s always difficult on the road, and we need to recover from playing and travelling”

Indeed, Phuket FC will have to pace themselves in the coming weeks, with a hectic away-away-home-away-home run.

The Islanders next take on the Royal Thai Navy football club at Sattahip Navy Stadium in Chonburi, this Wednesday with a 6pm kickoff.

Wasting no time, the Islanders travel up to the Northeast, to take on the Khon Kaen FC this coming Saturday, before returning home for their next match, against Airforce on Wednesday, July 21, then flying back to Bangkok for a Sunday, August 25 showdown with Singtharua Port Lions.

Other YL1 results from the weekend are as follows

YL1 rankings and points after week 21/34