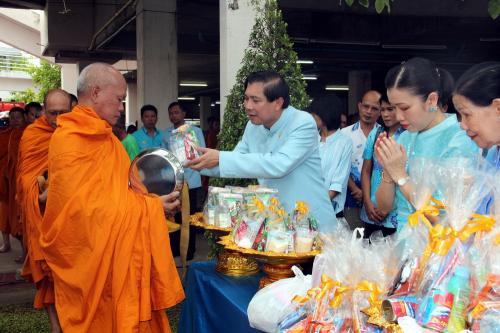 The Governor, all three vice governors and Phuket Provincial Police Commander Choti Chavalviwat, along with 500 officers and local residents, made the dry food offering in front of Queen Sirikit Park.

The government officers were all dressed in blue, the color of HM the Queen.

Gov Maitri and his wife, Pavinee Inthusut, next attended a ceremony at Satree Phuket School, where they joined well-wishers in signing a congratulatory book for HM Queen Sirikit. At the ceremony, 106 scholarships were awarded to academically excelling underprivileged children.

HM the Queen’s birthday celebrations were in full swing in Phuket today, after getting underway yesterday at the Phuket Mining Museum in Kathu, when the Governor and 600 attendees planted 5,000 plants and released wild chickens, butterflies, fish and shrimps at the site to honor the Queen.