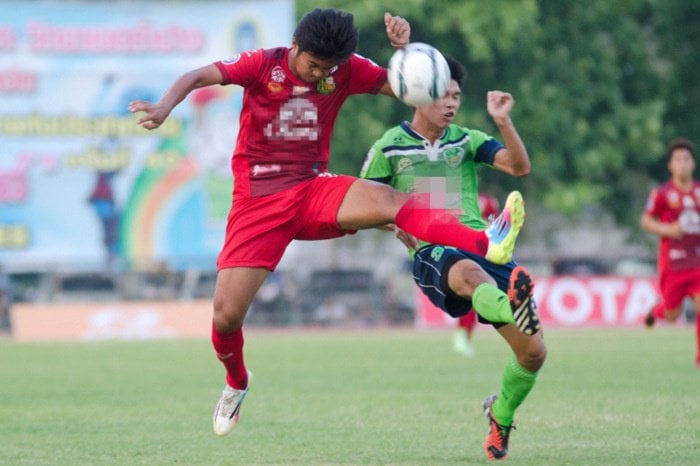 Lampang striker Jennarong Wongnoi opened the scoring in the 7th minute, and midfielder teammate Surapong Thongbua sealed the match with a goal just two minutes before the final whistle.

The Ronins’ loss, however, is being used to motivate the squad to gain maximum points from a heavy line-up of upcoming fixtures in the 2015 Yamaha League One campaign.

On Wednesday, the Ronins secured all three points from their match against Samut Songkram, and they will be looking for three more points when they take on northerners Chiang Mai FC at Surakul Stadium tonight.

Both Samut Songkram and Chiang Mai are struggling in the relegation zone, languishing 15th and 16th on the league table, respectively.

“We have two good chances to take points and climb farther up the league table this week,” Phuket FC Head Coach Songyot ‘Dang’ Klinsrisuk told the Phuket Gazette on Tuesday.

Coach Dang, who rested many key players for the match in Lampang, vowed to return his team to full strength on the pitch for the two home matches this week.

Key midfielder Yusuke Sato and spearhead striker Berlin Nlome Ndebi both were to be recalled to the starting line-up, Coach Dang noted.

“We gave our young players a chance to have top-level experience in the Lampang match, as some of them have never played at this level before,” he said.

“But now we can focus purely on our league campaign. This is a very important opportunity to take all six points on home turf.”

The strategy has so far worked, with Phuket taking three points from Samut Songkram after coming back from 0-1 down.

Although the Ronins looked clearly to be the better side and controlled play for most of the match, it was visiting player Sitthinon Ketkaew who put his side ahead first, early in the second half.

Man of the match Pipat Thonkanya, however, took the field after an hour of play to substitute Phuket striker Patiphat Armatantree. Pipat had one goal in mind – to put Phuket FC in front.

After just five minutes on the field, Pipat fired a brilliant long-range strike from 35 yards out to level the score.

Five minutes later, Phuket FC’s top striker Berlin slotted in a rebound fired in by teammate Andre Lopes to give Phuket FC the three points they were hunting for.

“We have to give credit to the visitors, they defended very well,” said Phuket FC Manager Pariyawit Atchariyachai. “But it was our boys who never gave up and found a way to come back.”

Phuket fans will be looking for a return of the Ronins’ fighting spirit in the match against Chiang Mai tonight.

Kickoff is at 7pm.

Phuket FC’s heavy schedule continues next Wednesday, when they play away to Prachuap FC.

The squad will return to Phuket for their May 2 derby against bayside rivals Krabi FC. Kickoff is at 7pm.