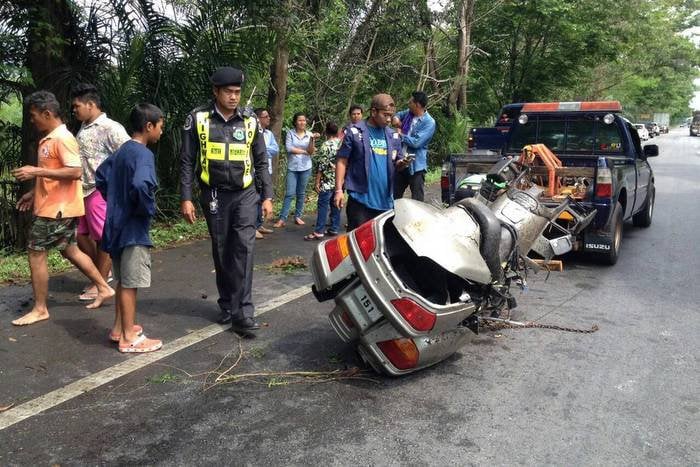 PHUKET: A big bike rider from Phuket was killed and his passenger seriously injured yesterday when he lost control of his motorcycle on a wet road and crashed into a tree in Chumphon province.

Police arrived at the scene on Asia 41 Road in Lamae district to find Kathu resident Boonsong Witeewai, 52, dead on the ground and his 49-year-old passenger, Duongduen Witeewai, with a broken leg and scratches all over her body, Lt Chamnan Khongthong of the Lamae Police told the Phuket Gazette.

A seriously damaged Honda Goldwing motorcycle, worth more than 1 million baht, was found near a tree on the side of the road.

“The couple were travelling from Phuket to Uthai Thani to attend the Goldwing Cup Thailand. They were travelling with two other bikes, which were ahead of them when the accident happened,” Lt Chamnan said.

“While they were riding through Chumphon, heavy rain started to fall and the road became slippery. Mr Boonsong lost control of his motorcycle and slammed into a tree on the side of the road. He was killed instantly.”

Ms Duongduen was taken to Lamae Hospital for treatment.