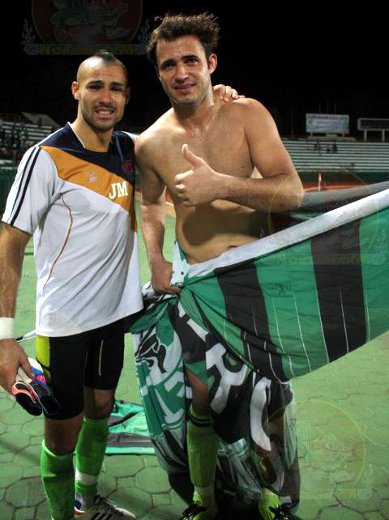 PHUKET: Despite some good scoring chances and strong crowd support, Phuket FC were only able to take a single point away from last night’s encounter with Songklha FC, which ended in a 0-0 draw.

Going into the match mired in the five-team relegation zone, Phuket FC went on the attack early with some good scoring chances.

Former FC Phuket goalkeeper Jonathan Matijas was put firmly to the test several times; in the 17th minute Phuket captain Watcharapong Jun-ngam set up Thawin Butsombat inside the penalty box, but the Frenchman managed to deflect his low shot wide, then pounced on it as it rolled toward the far post.

As the game wore on, Phuket FC keeper Alonso da Silva, playing in his last game as an Islander, also got a chance to show off his keeping prowess with a diving punch save. The Brazilian will play for struggling TPL side Samut Songkhram FC in the second half of the season.

Despite some exciting play, the match ended scoreless and the 2,100 fans went home less than euphoric.
REVOLVING DOOR

Before the match, the crowd was informed of several new signings aimed at lifting the Islanders out of the relegation zone and remaining in Yamaha Division One next season:

Former coach Milos Joksic, who resigned after the team’s 6-0 thrashing at PTT Rayong on July 14, will be replaced by Narong Ajarayut, a local businessman and former coach of the Thai National Team.

“We will reveal more players, but I don’t want to announce them until everything has been finalized,” Pamuk told the crowd

The new players will debut on Wednesday, when they play Songkhla again at the 20,000-seat Jiranakorn Stadium in Haad Yai. Kick-off is at 4pm.

Fans interested in attending can take advantage of free bus service to and from Haad Yai courtesy of the team.

Phuket’s next home match will be against PTT Rayong this Saturday at Surakul Stadium.

Off the pitch, many fans trying to enter the stadium with beverages in cans or plastic bottles were put off by a new rule that forbids taking beverage containers inside the stadium.

They were greeted at the entrance by volunteer soldiers dressed in camouflage standing next to black, plastic trash bags filled with lightweight 16-ounce plastic cups.

Alcohol and smoking have always technically been banned inside the stadium area, which is a public park, but the rule has never been enforced.

Following an incident during the Krabi game, however, the team was fined for an incident when somebody threw a can or bottle from the stands; thus the new measure.

“I’ve been to nearly every match since the team was formed and I always bring ice-cold beer,” pleaded one expat, who came with a small cooler of beers. “Why should I suffer for some other idiot’s actions?” he asked.

An Englishwoman who also regularly attends the matches said she was equally put off at the prospect of having to drink beer out of a plastic container.

Vendors selling beverages just outside the gate were well prepared for the new rule, with plenty of plastic bags at the ready in a variety of sizes.

The new stricture will be in place for the rest of the season, security staff at the stadium said.

Other Yamaha Division One results over the weekend: