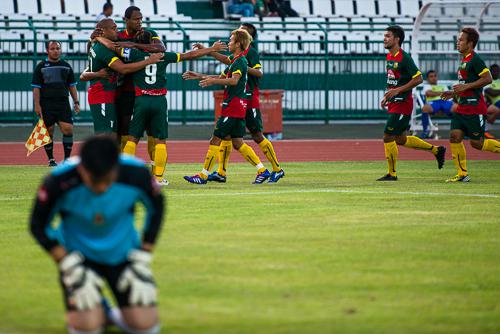 The friendly match is part of a three-team “Saksee Cup” which will conclude this afternoon with a match between Phuket FC and Thai Division Two contenders, Nakhon Si Heritage from Nakhon Si Thammarat.

Perhaps due to the elections yesterday, only about 1,000 fans turned out for the Sunday evening Thai-Brunei showdown under clear skies.

On Saturday, Brunei DPMM had little trouble beating Nakhon Si Heritage 3-1, but Phuket FC proved to be on a different level from their fellow Thai Southerners.

Although possession was more evenly weighted in the second half, neither side was able to do anything to alter the scoreboard; and despite the “friendly” nature of the match, it seemed much more like a rivalry cup match, featuring a number of aggressive challenges, “low blows”, ensuing scuffles and their respective bookings.

Notably, Brunei DPMM is the former club of Phuket’s towering Brazilian centerback, Tales dos Santos, who along with Fabiano and Eber, seemed to be having an emotional evening despite having the advantageous scoreline.

Nonethless, Phuket FC Coach Stefano “Teco” Cugurra told the Phuket Gazette after the match that he has has talked to his boys about controlling their tempers.

“As Brazilians, they can get very competitive, but especially when in league play, they’ve got to be sure to keep their cool. It’s hard to avoid yellow cards sometimes, but we’ve got to avoid getting red cards.”

Meanwhile, Brunei’s coach Steve Kean – a former Blackburn manager – said he was disappointed with the result.

“[They were] both really good teams, but I think we could have done better. It’s okay, though, we’ve only been training for about three weeks and got a lot of work ahead of us before the [Singapore] league start,” he said.

With the win, Phuket FC’s pre-season record is now 3 and 0, realized by seven goals and a continuing clean sheet.

For video highlights of last night’s goals and other attacking fronts, click here.

After that, their next friendly fixture, and ultimate preparation test, will be this Saturday, February 1, against Thai Premier League power house, Chonburi FC.

Kickoff at Surakul Stadium will be 6pm.