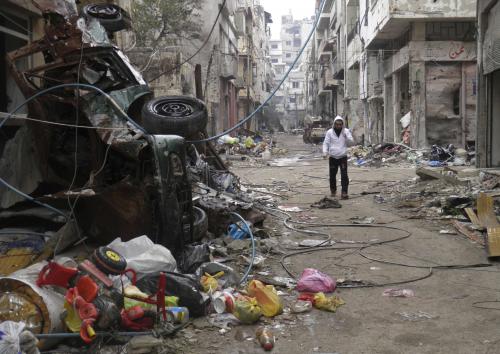 
Syria talks bring offer of exit from siege of Homs
Reuters / Phuket Gazette
PHUKET: The Syrian government offered to let women and children leave the besieged city of Homs on Sunday as negotiators from the warring sides discussed humanitarian gestures on a second day of face-to-face talks in Geneva.

Government and opposition delegates also spoke of releasing prisoners and enabling access for aid convoys during what the U.N. mediator acknowledged was a slow process but one which he hoped would lead to broaching the central issue that divides them after three years of civil war – namely the future of Syria’s political structures and of President Bashar al-Assad.

Homs, occupying a strategic location at the centre of Syria’s main road network, has been a key battleground. Assad’s forces retook many of the surrounding towns and villages last year, leaving rebels under siege in the centre of Homs itself, along with thousands of civilians.

Syrian Deputy Foreign Minister Faisal Mekdad told a news conference after Sunday’s meetings that the government would let women and children leave the city centre if rebels gave them safe passage. U.N. mediator Lakhdar Brahimi said he understood that they would be free to quit Homs immediately.

Mekdad said: “If the armed terrorists in Homs allow women and children to leave the old city of Homs, we will allow them every access. Not only that, we will provide them with shelter, medicines and all that is needed … We are ready to allow any humanitarian aid to enter into the city through the agreements and arrangements made with the U.N.”

In the city itself, however, opposition activists said rebels were demanding a complete lifting of the blockade. Some criticised negotiations in Geneva on a limited ceasefire to allow people to leave and let aid into the city. One video posted online showed demonstrators carrying Islamist flags and denouncing the Geneva talks as “treachery”.

Brahimi, who presided on Saturday over the first direct meeting between the two delegations, met both together again on Sunday morning, before holding discussions with each side separately in the afternoon to go over their positions. He aimed to hold another joint session on Monday, when he hoped to begin discussion of a U.N. plan for a transitional government.

Acknowledging the slow start to proceedings which began with a formal international conference on Wednesday, Brahimi said: “This is a political negotiation … Our negotiation is not the main place where humanitarian issues are discussed.

“But I think we all felt … that you cannot start a negotiation about Syria without having some discussion about the very, very bad humanitarian situation that exists.”

Brahimi said opposition delegates, who want the government to release tens of thousands of detainees, had agreed to a government request to try to provide a list of those held by armed rebel groups – though many of these groups, fighting among themselves, do not recognise the negotiators’ authority.

Asked about a list of 47,000 detainees submitted by the opposition, Mekdad said the government had examined the list and found most had either never been held or were now free. He also denied rebel assertions that children were being held.

Western powers and Russia, respectively supportive of the opposition and of Assad, have buried their differences in the hope that a negotiating process can prevent the Syrian conflict spilling further across the region.

International diplomats say the very fact of talking, and possibly making concessions on humanitarian grounds, is a start to seeking a settlement to a war neither side seems capable of winning outright. But that still seems a distant prospect.

Moscow, Western governments and the rebels’ Arab allies all endorsed a U.N. protocol agreed in 2012 and known as Geneva 1 that calls for a transitional government – although, unlike the United States and others, Russia says this does not mean categorically that Assad must give up power immediately.

The opposition’s insistence that he must, and Assad’s equally determined rejection of that demand, leave it unclear what progress the talks, dubbed Geneva 2, can achieve.

Russian Foreign Minister Sergei Lavrov said earlier he hoped the talks could be conducted in a more business-like manner after the two sides exchanged bitter recriminations during a preliminary day of speeches last Wednesday.

In an interview with NTV television, he called for progress on aid, unblocking besieged areas and prisoner exchanges.

“All this would strengthen trust and affect the atmosphere at the talks in Geneva. Beyond this, it is very difficult to make guesses; the situation is extremely grave, positions are polarised, emotions are on the edge,” he said in comments posted on the Foreign Ministry’s website.

Underlining the immense difficulty of implementing even local agreements on the ground, a U.N. agency trying to deliver aid to a besieged district of Damascus said state checkpoint officials had hampered its work, despite assurances from the government that it would allow the distributions.

Humanitarian efforts in Syria have been hindered by fighting and by combatants on both sides who often try to block deliveries to areas held by their opponents.

The U.N. Relief and Works Agency (UNRWA) complained about problems in delivering food and other aid to Yarmouk, a district of Damascus that is home to impoverished Syrians and Palestinians, despite government assurances.

An adviser to Assad, Bouthaina Shaaban, complained that opposition delegates were focusing on local issues and said the U.N. protocol agreed 18 months ago should be amended.

“We did not come here to bring relief to a region here or a region there. We came here to restore safety and security to our country,” she said.

The government was ready to discuss the 2012 Geneva accord, but that “doesn’t mean every word of Geneva is sacred”.

“Geneva is not the Koran, it’s not the Gospel,” she said. “Geneva was issued in June 2012. We are now January 26, 2014. The ground has changed. We change according to what this reality requires.”

In the summer of 2012 rebel forces took control of much of Aleppo, Syria’s biggest city, and were challenging Assad’s forces on the edge of Damascus. Since then, backed by Lebanese Hezbollah fighters and Iranian military commanders, Assad’s forces have halted the rebel advances and consolidated control over the centre of the country, although there is little sign of them retaking swathes of rebel-held territory in the east.

Syrian Information Minister Omran Zoabi said there was no chance of Assad surrendering power. “If anybody thinks or believes that there is a possibility for what is called the stepping down of President Bashar al-Assad, they live in a mythical world and let them stay in Alice in Wonderland.”

Profound mutual mistrust and the absence from Geneva of powerful Islamist opposition groups make any substantial progress very difficult, and previous aid deals and ceasefires in Syria have proved short-lived.

There are now hundreds of rebel groups across the country, including hardline Islamists and al Qaeda-linked militants whose presence has discouraged Western governments from backing the rebellion more forcefully.