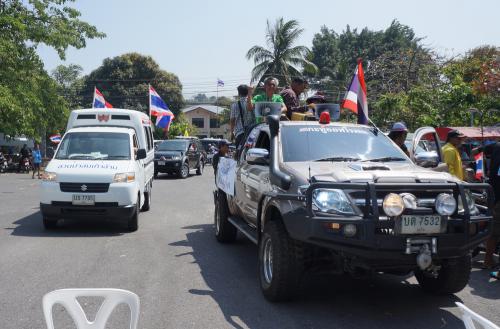 PHUKET: Phuket protesters arriving late to shut down the polling station in Thalang yesterday resulted in one lone voter casting a ballot in the advance voting for the February 2 national election.

“We cannot reveal who that person was, but he arrived and voted before the protesters turned up at about 9:30am,” said polling station chief Chaiya Khamsaad.

Once the protesters arrived, Mr Chaiya closed the voting booths in order to avoid any violence – as per the order of Phuket Election Commission (PEC) Director Kittipong Thiengkunakrit on Saturday (story here).

Protesters at Phuket Community Hall and Phuket City Hall were more successful, arriving before 8:30am to prevent the polling stations from opening at all.

Protest co-ordinator Suratin Lian-udom, who led the siege at the Phuket Community Hall station, thanked protesters for their support.

“The country must undergo reforms before any elections are held,” he said.

Despite being forced to close the polls early, Mr Kittipong was happy, as there were no incidents of violence at any of the three stations in Phuket.

“The majority of voters will have the chance to cast their votes on February 2,” he said.

Mr Kittipong urged voters who were denied their right to vote yesterday to file a formal complaint.

“People who were unable to vote yesterday can download the complaint form [click here] and submit it in person or post it to the District Office where they are registered on the electoral roll,” he said.

Phuket Town to enjoy Chinese acrobats, but no fireworks for Year of the Horse