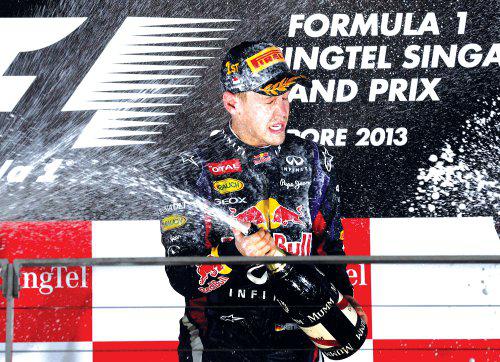 PHUKET: Sebastion Vettel faced the boos yet again as he collected his Monza and Singapore trophies. This has become an unhappy routine ritual at GPs. F1 is losing the fan base that it rebuilt after the Schumacher dark age. And the “Vettel Effect” is the cause.

Red Bull Team Principal Christian Horner has said it is “unfair” to boo Vettel. Unfair it might be, but the fans are speaking, and I wonder if anyone is listening. Vettel effectively won in Monza in one lap. He started and finished at the front in Singapore. Fernando Alonso and Kimi Räikkönen drove excellent races, but has the battle for the Championship degraded into a skirmish for second place? And is the racing down the order all there is to look at? Alonso even said finishing second tasted like victory. Vettel won on the fastest circuit in F1, and then again on the slowest. Red Bull looks unstoppable.

Lewis Hamilton may think that the Red Bull dominance is not depressing. The fans disagree. I suspect that the 2014 changes to the formula are ultimate cause of the horrible fiasco that 2013 now looks set to become; conceivably the worst since the Schumacher supremacy. History may say that most teams, with limited budgets, have been forced so to focus upon next season’s car that the 2013 competition has been sacrificed.

F1 decided to impose greener engines when that seemed a world priority. Unhappily it is being implemented in a period of much reduced financial circumstances. The depressing result of F1 demanding huge new investment in entirely new engines in a period of austerity seems to have been a swift collective intake of breath, with all except the very richest teams switching focus to next year.

I am convinced Mercedes is in that position, and perhaps even Ferrari has allowed its 2013 concentration to lapse. I surmise Lotus is in financial difficulties, which is why Räikkönen jumped ship to a team that had previously shown him the door. Williams and Sauber look to be struggling. Even McLaren has a lot to improve to keep the sponsorships it needs to be in the A league. I just hope they can all step up to the mark next year.

The negative fan effect from this lack of attention on 2013 has focused on Red Bull, even though ironically it is one team that has undoubtedly concentrated on winning this season. Partly this antipathy is “tall poppy syndrome” and partly because their deep pockets have bought them Adrian Newey, the best aerodynamic designer in the world. And partly it is because the team is perhaps perceived to have muscled Pirelli into a mid-season change to their tyre formulation to suit Red Bull cars.

It has resolved onto Vettel because of the team’s determination, against the conviction of the fans, that Vettel should be seen as the sport’s greatest driver; ever prepared to sacrifice a second driver to overstate Vettel. This campaign has been so passionate that Vettel seems to believe his own spin, and all this has led to him being demonized.

The turning point for Vettel was the Malaysian GP where, blatantly and unsportingly, he stole the race from his popular team-mate, Mark Webber. His image went from “Nice Kid” to “Egoman” in one graceless manoeuvre. Meanwhile Alonso and Kimi are lauded as the best drivers, and gain public stature as Vettel shrinks, even though he is winning on the track. I expect to see him being booed as he wins the Championship.

Turning Vettel into a new Schumacher is bad for Vettel, bad for Red Bull, bad for sponsors and bad for F1. Michael Schumacher inflicted huge damage on the sport’s fan base, but for all his faults, he was acclaimed as the best driver in F1. Red Bull now seems to be trying to rehabilitate Vettel. After Singapore, Horner said in Singapore “He is a great kid.

He has a great sense of humor. He has a big heart at the end of the day.” That, I assume, is part of an attempt to manage a ruined image back to approach what it was before Malaysia. It will not work. Vettel’s self-aggrandizing statements after Sepang still stand on the record. And Mark Webber is departing F1. Vettel’s image is not helped by Schumacher’s public support. That can only increase the PR problem, except with the true believers who are not Vettel’s challenge.

Michael Schumacher had vociferous supporters even as so many fans were switching off; that doesn’t help. In creating the 2013 problem with a mistimed formula change, F1 is dicing with extinction. F1 will not die in 2013, but will be diminished. 2014 will then be a colossal test for the sport, and such a radical change inevitably causes an unpredictable season. So all eyes will be on the opening races.

We all hope they will be wonderful. To add spice, New Jersey, Austria, Russia, and Mexico have been added to 2014 calendar. F1 is such a wonderful institution, so much buzz, glamour and precision skills. I pray it can continue; I have my tickets booked for Abu Dhabi and intend to enjoy myself. Back in the present, the next engagement is the generally unloved Yeongyam track in Korea. It has an unusual layout. The long straights in the first sector should suit Lotus.

The mix of turns in the next two sectors should suit Red Bull and perhaps Ferrari. So it’s a mixed circuit. It’s easy on tyres, and Pirelli has continued its disappointing harder tyre choice, upgrading to a medium compound alongside its retained supersoft. I expect two stop strategies; I expect Sebastian Vettel to win, and Kimi and Alonso to battle for second. I would dearly love to be wrong, and see a surprising race. One hopeful sign is that rain and cool weather are forecast, which could help Mercedes, who would dearly love a podium finish.

Qualifiers start on Saturday at noon. The race is on Sunday at 1pm. Join The Digby at The Green Man to watch it on the Big Screen (click here for map).— The Digby