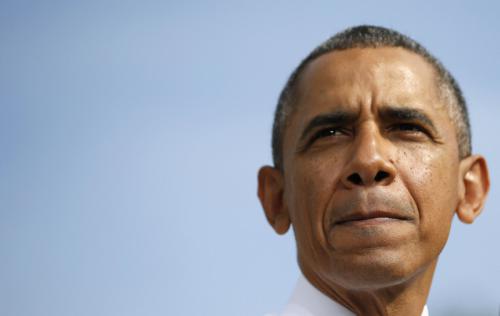 
Obama cancels Asia tour over shutdown; raises questions on U.S. pivot
Reuters / Phuket Gazette
PHUKET: President Barack Obama called off plans to visit Asia and attend two summits because of the U.S. government shutdown, raising questions about the strategic “pivot” to the region that he announced just two years ago.

Obama had planned to depart on Saturday for a four-nation, week-long trip. He cancelled visits to Malaysia and the Philippines earlier this week because of his budget struggle in the U.S. Congress and said late on Thursday he would not attend the regional summits in Indonesia and Brunei.

The political standoff over the U.S. budget has shut down non-essential government services and appeared likely to drag on for another week or longer. Another crisis looms in two weeks when lawmakers must decide whether to increase the U.S. government’s $16.7 trillion debt borrowing limit.

“The president made this decision based on the difficulty in moving forward with foreign travel in the face of a shutdown, and his determination to continue pressing his case that Republicans should immediately allow a vote to reopen the government,” the White House said.

Two of his main aims would have been to discuss the Syria crisis with Putin and to hold talks on a maritime code of conduct for disputed territories in the oil- and gas-rich South China Sea.

“We are disappointed,” said Indonesian Information Minister Tifatul Sembiring on the island of Bali, host of the Asia-Pacific Economic Cooperation (APEC) summit from Sunday.

“I think the summit will go on, there is a long-term plan. (But) without Obama, you can imagine how disappointed we are. We could hardly imagine he wouldn’t come.”

Obama was also scheduled to attend the East Asia Summit, organised by the Association of Southeast Asian Nations (ASEAN), in Brunei next week.

Xi, who was on a visit to Malaysia on Friday, did not comment on Obama’s decision. But analysts said the no-show by the U.S. president would work to China’s advantage.

“While his decision is perfectly understandable, it projects a poor image of America as a country that is politically dysfunctional and on the verge of another economic crisis,” said Ian Storey, senior fellow at Singapore’s Institute of Southeast Asian Studies.

“Meanwhile, cash-rich and self-confident China will have the floor to itself.”

Storey said the domestic crisis was posing a severe dilemma for Obama, since it clashed with a cherished foreign policy objective. At the APEC and East Asia Summits two years ago, Obama announced the U.S. strategic pivot, or rebalancing, toward Asia, which was seen as a reaction to the growing clout of China.

“On the one hand he needs to be in Asia to demonstrate America’s commitment to the region and especially to the ASEAN-led regional security architecture that has been one of the central planks of his administration’s Asia policy,” said Storey.

“But with government employees on unpaid leave, Obama cannot afford to leave Washington and be seen hob-nobbing with world leaders on a tropical island.”

The Washington stalemate has idled hundreds of thousands of federal government workers and comes two weeks before Washington faces an even more crucial deadline – raising the U.S. debt limit so the United States can pay its bills. A bitter debate rages over that issue as well and if left unresolved could result in a U.S. debt default.

Denis Blair, the former commander of U.S. forces in the Pacific region, said not too much should be read into Obama’s decision to call off the tour.

“I would read nothing more into the postponement of President Obama’s trip than that he has to stay on and take care of this (crisis),” he told reporters in Manila.

“I’m very confident that he will reschedule and frankly it will be a better visit if he’s not on the phone having to call back home to get reports on the latest development there.”

Secretary of State John Kerry will lead delegations to both summits in place of Obama. Kerry will also go to Malaysia and the Philippines.

Obama phoned both President Susilo Bambang Yudhoyono and the Sultan of Brunei to inform them of his decision, the White House said.

Obama looks forward to working with Asian allies and returning to the region at a later date, the White House said.


Search for victims of Sicily migrant wreck postponed
Reuters / Phuket Gazette
PHUKET: Choppy seas prevented divers on Friday from recovering more bodies of migrants who died in a shipwreck off Sicily that has killed an estimated 300, in one of the worst disasters of Europe’s immigration crisis.

Rescue teams have so far recovered 111 bodies and expect to find more than 100 others in and around the wreck, submerged in 47 metres of water less than a kilometer from the shore of the southern island of Lampedusa.

After 155 people were pulled from the water alive on Thursday, strong winds and metre-high waves made it impossible for 40 divers to safely collect bodies. There was little hope of finding more survivors from the almost 500 passengers estimated to have been on board.

“Though the bad sea conditions persist, our guys are ready to go down if a window opens up that makes it safe for them,” coastguard spokesman Filippo Marini told Reuters.

Though the tiny island takes in thousands of immigrants every year and there have been similar wrecks in the past, residents were shaken by the sheer size of the tragedy.

“We should send a ship to bring those who are fleeing wars to Italy safely,” said Enzo, a 44-year-old fisherman.

A black flag bearing the word “shame” was flying over the port, close to a cemetery of rotting boats used by migrants to make past crossings from North Africa.

Lampedusa, a tiny fishing and tourist island halfway between Sicily and the coasts of Tunisia and Libya, has borne the brunt of a crisis which over the years has seen tens of thousands of migrants arrive in unsafe and overcrowded vessels.

Italy is holding a day of mourning on Friday, and schools will observe a minute’s silence in memory of the victims. On Lampedusa, gas stations, restaurants and shops were closed and a public mass was to be held in the evening.


Assad says Turkey will pay for backing Syrian rebels
Reuters / Phuket Gazette
PHUKET: Syrian President Bashar al-Assad has told Turkey it will pay a heavy price for backing rebels fighting to oust him, accusing it of harbouring “terrorists” along its border who would soon turn against their hosts.

In an interview with Turkey’s Halk TV due to be broadcast later on Friday, Assad called Turkish Prime Minister Tayyip Erdogan “bigoted” and said Ankara was allowing terrorists to cross into Syria to attack the army and Syrian civilians.