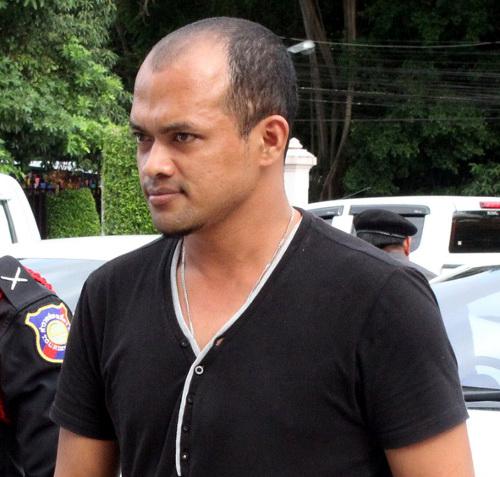 PHUKET: The illegal Phuket taxi driver who abducted and sexually assaulted a teenage Chinese tourist while under the influence of drugs and alcohol walked out of Phuket Provincial Court a free man today after being handed down a suspended sentence.

Paitoon Kruain, 32, was handed a sentence of 13 months suspended jail time and a fine of 10,500 baht after pleading guilty to all charges against him.

The court initially sentenced him to 26 months in prison and ordered him to pay a fine of 21,000 baht, a court clerk told the Phuket Gazette this morning.

“However, because he pled guilty to all charges, the penalty was cut in half,” she said.

As this was his first offense, his sentence was suspended and he will not be required to serve time in prison, the clerk added.

“However, he must present himself to the court every month,” the clerk said.

Mr Paitoon picked up the Chinese tourist at Phuket International airport and kept her locked in his car for nearly five hours as he drove around the island while repeatedly touching her (story here).

The young woman held captive was freed from her ordeal only after Mr Paitoon’s car ran out of gas. When he got out of the car to push it, she fled and was assisted by passers-by.

After his subsequent arrest, he tested positive for ya bah [methamphetamine], leading to a Category 1 narcotics charge, in addition to a charge for consuming alcohol while driving.

He also paid a 2,000-baht fine for illegally operating a regular vehicle as a taxi (story here).

After the sentence was handed down in court today, Mr Paitoon was escorted out of the courtroom via the defendant’s exit.

Konlayut Jattutasri, chief of the licensing division at the Phuket Provincial Land Transportation Office, confirmed to the Gazette this afternoon that Mr Paitoon will be ineligible to apply to operate a legal Phuket taxi for five years.

“He cannot apply for a taxi driver’s license during the period of the full sentence handed down or for three years after that.

“By October 2018, he will have the right to apply for a taxi driver’s license in Phuket,” Mr Konlayut said.

All rise for the Phuket Vegetarian Festival