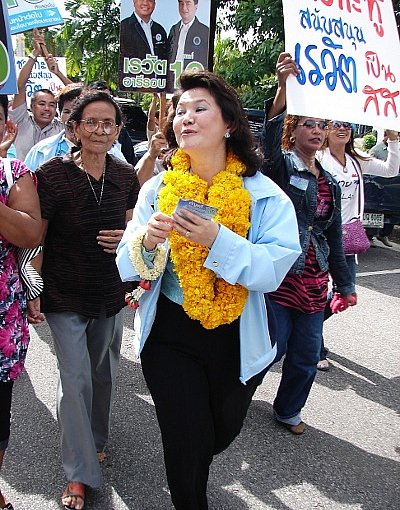 “I, Mrs Anchalee and the president [of the Democrat office] for Phuket 2 constituency, have requested security due to concerns for our safety during the election process,” Mr Wirasak told the Phuket Gazette today.

The news was announced at a conference of all police superintendents in Phuket.

Presiding over the conference was Lt Gen Kokiat Wongvorachart, Commissioner of Provincial Police for all of Police Region 8.

Phuket Provincial Police Commander Pekad Tantipong explained, “The police must be impartial and provide security to any candidate who requests protection.”

However, he added that precisely which officers will be assigned to protect who was the responsibility of the police.

“Government officials requesting protection would not be involved in the process,” he said.

“The Royal Thai Police Headquarters in Bangkok has stipulated the importance of maintaining order during this election and providing security for candidates.

“The run-up to the election in Phuket [so far] has been calm, but there is the potential for it to become violent,” Maj Gen Pekad said.

A total of 885 Phuket police officers will be assigned to guard against vote tampering and to investigate any claims of vote buying, he said.

Protective details would not be chosen from that group, he added.