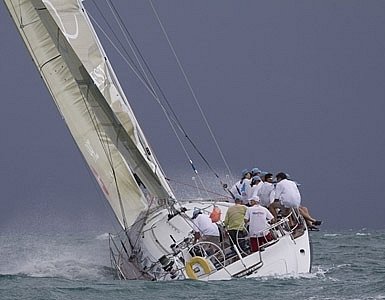 PHUKET SPORTS: The Six Senses Phuket Raceweek, winner of the Asia Boating Award for “Best Asian Regatta of the Year 2011”, returns with four days of international-standard yacht racing, from July 20 to 24.

Now in its eighth year, the event attracts a host of yachts with a range of competitive standards across several classes.

Critical to being voted best regatta in Asia is participant feedback, in which Raceweek basks in the glow of local yacht racing legends.

Scott Duncanson of Quantum Sails, Australia, says, “The crew of Quantum Fusion M look forward to Phuket Raceweek each year. The winds are almost always good, and the air temperature just right, and being in Phuket’s ‘off season’ more local people have time to compete and enjoy.

“Logistically, it is one of the easiest and safest regattas for boat owners. When Simon James is Principal Race Officer, there is no doubt we are in for some well managed and quality racing,” he added.

Duncanson rates the professional organization of the event second to none.

“One of the best on the South East Asian circuit. Our sponsorship [Quantum Sale Design Group and ISS] simply works. It creates business opportunities and sales each year.

“ImageAsia makes sure our name is out there for all to see, like no other regatta can,” he added.

David Liddell, owner of Racewek 2010 Multihull Racing class winner Miss Saigon, says, “The wind and the fact that my boat is a multihull make it so much more worthwhile flying back from Europe to experience the Six Senses Phuket Raceweek and the immediately preceding SEA Property Multihull Challenge.

“This is a very well organized event with excellent racing, good winds, and good on-the-water race officials,” he said.

Ben Copley of Australia, who won Raceweek’s Racing class last year on his Swan CS 42 Katsu, says, “The main attractions to the regatta are the good winds and organization. I have raced the last three years on Katsu, competing in seven regattas per year in Southeast Asia. I find the Six Senses Phuket Raceweek an excellent professional organization. One of the best in Asia. I intend participating for many years to come.”

Phuket sailing stalwart Henry Kaye, the only sailor to compete in every Phuket King’s Cup Regatta, rates the event highly. Kaye has won all major regattas in Asia in various boats.

“My general impression is that it has good organization and good race management. It’s also very convenient and has a good base from which to run a regatta. I like the fact that the regatta is raced all in one place,” he said.

“I sail Thor, a trimaran recognized as the fastest sailing yacht in Asia. I race in most regattas [in Asia] and I consider this a good one.

“The courses could be a little longer. However, this is from the fastest boat so I do understand the need for enough time for the slower boats to finish,” he added.

“We’d like to see our charter boat entries grow, especially with visitors from overseas. Six Senses Phuket Raceweek offers a genuine opportunity for non-boat owners, as well as those who keep their yachts elsewhere, to join one of Asia’s best regattas by entering a chartered boat,” he said.

Phuket Raceweek is sponsored by the Phuket Gazette and PGTV.

For more information or to register visit phuketraceweek.com