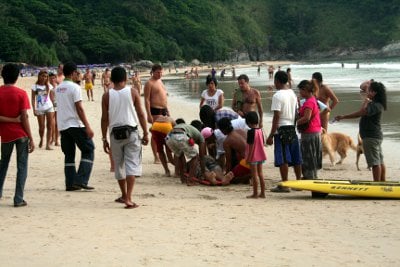 PHUKET: An emotionally distraught man was saved from drowning at Phuket’s Nai Harn Beach this afternoon.

It was the fourth time in recent weeks that the man has been rescued from drowning in the same fashion.

Beach vendor Song “Dui” Sa-ingtong told the Phuket Gazette that the Belgian man, aged in his 40s and a regular visitor to the beach, arrived at about 4pm.

“He was very drunk and he dragged his own private kayak into the water and started paddling. When he was about 60 meters offshore, the kayak overturned and he was in the water,” said Mr Song.

“The lifeguard kept a close eye on him and when the kayak overturned the man disappeared from view, so the lifeguard raced out to rescue him,” he added.

When the man was brought safely back to shore, he was unconscious but breathing easily on his own, Mr Song said.

“When he regained consciousness, he kept calling out his wife’s name. She came to the beach and he started to calm down,” he added.

A Tourist Rescue Center officer at the scene told the Gazette that the man did not want to be taken to hospital.

“He has done this three times before,” another Rescue Center officer confirmed.

The Belgian embassy had been notified of the incident, the officer added.