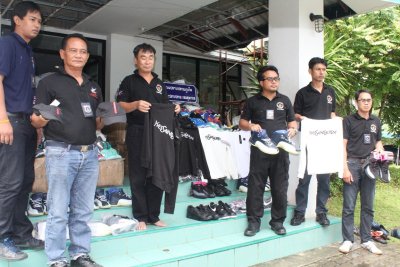 PHUKET: Phuket Customs officers today presented to the press almost 2,000 counterfeit items, with an estimated street value of over 1.5 million baht, that were seized in a raid last week.

Officers from the Royal Thai Customs Investigation and Suppression Bureau (ISB) raided a transportation company depot on the bypass road after receiving a report that a consignment of counterfeit products would be arriving on November 20.

“Since January, we have seized counterfeit products valued at more than 3.5mn baht,” he said.

“Most of it was smuggled in from Bangkok and then distributed to the tourist areas around Phuket.

“We will continue our investigation and hopefully identify the dealers. They will face some serious charges,” he added.