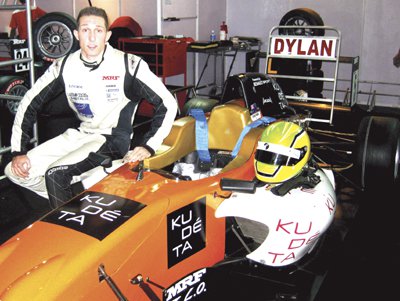 The new MRF Challenge Championships credibility is supported by Indian Formula 1 star Narain Karthikeyan, who is acting as the series ambassador.

The cars are powered by 2.0-liter, 210 brake horse power Renault engines that propel the drivers to speeds of up to 260km/h. MRF has supplied specifically designed ZLO slick tyres and the cars’ performance levels are similar to that of international Formula 3 standards.

The championship features 10 races over four weekends from October through to February and is broadcast on ESPN Star Sports across Asia. The first races were held in New Delhi at the Buddh International F1 Circuit late October. The series then moves back to the F1 Circuit in India from November 30 to December 2, before the final two races in Chennai in early February.

The championship consists of 18 drivers from 19 countries Young is the only driver flying the flag for Australia and also representing the island of Phuket.

Young, based in both Australia and Phuket, is thrilled to be linked with such successful brands in the Asia Pacific region. “I would like to express my gratitude to KU DÉ TA Singapore as my major sponsor and Indigo Pearl Resort Phuket for their invaluable support and am excited about where these partnerships could take us, as I’m hoping to emulate on the track what they have achieved as successful and iconic brands.”

KU DÉ TA, perched on top of the Marina Bay Sands overlooking Singapore’s Formula 1 circuit, came on board as Dylan’s major sponsor for the championship prior to the opening two races at the Airtel Indian Formula 1 Grand Prix in late October.

Equally pleased with the new sponsorship was Indigo Pearl’s General Manager Kelly Lewis who said, “We are very excited about this new partnership with Dylan. He is a proven winner in his field. To be affiliated, achieve such a distinction and industry endorsements inspires him and the team at Indigo Pearl to continue its winning ways.”

Dylan raced in Formula BMW Pacific and the JK Racing Asia Series from 2010 to 2011 but faced an uphill battle this year due to budget problems until KU DÉ TA Singapore threw their support behind the speedster as his major backer, with Indigo Pearl Resort Phuket following suit for the upcoming races.