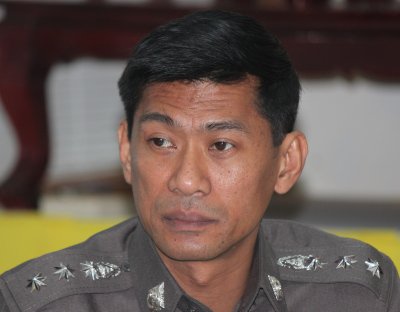 The transfer comes after Col Chote was temporarily suspended from duty on May 5 following allegations of underage staff working in Phuket Town clubs and entertainment venues.

Acting Superintendent of Phuket City Police Sakchai Limcharoen also confirmed to the Phuket Gazette yesterday that Col Sermphan Sirikong, who took up the post of Superintendent at Patong Police Station on April 10, will be Col Chote’s replacement.

“The order is effective from today. However, I have yet to be informed when Col Sermphan will be in post as Phuket City Police’s new commander,” said Col Sakchai.

“When that happens, I will revert to the position of Phuket Provincial Police Deputy Commander,” he added.

Col Jirapat Phochanaphan, chief of Samran Rat Police Station in Bangkok, will take over the position of Patong Police Superintendent.