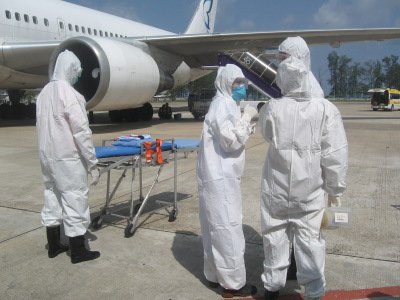 PHUKET: The Phuket Provincial Health Office, assisted by three airlines, yesterday carried out an exercise aimed at preventing a serious infectious disease spreading among passengers on board an aircraft and then infecting the island’s population.

The drill took place in and around Phuket International Airport’s multipurpose building. Personnel and equipment from Business Air, Thai Airways and AirAsia airlines played a part in the exercise to test the ‘Public Health Emergency of International Concern (PHEIC)’ plan.

The scenario begins with the fictitious country of “Neverland” reporting an outbreak of a “HxNy” strain of the bird flu virus. Nearly a month after the warning is issued, Phuket air traffic control receives an emergency message from a “Neverfly Airlines” plane approaching Phuket.

In the exercise scenario, a 45-year-old female passenger aboard the flight starts to exhibit symptoms of an infectious disease. She has a temperature of 38.9º Celsius, has rapid, shallow breathing, and is coughing.

The flight is due to arrive at Phuket International Airport in 30 minutes, at 10am.

Even before landing in Phuket, flight attendants follow protocols to minimize the risk to other passengers. The sick traveler is supplied with a hygiene mask and isolated from other passengers. Meanwhile, the aircraft pilot informs Phuket air traffic control of the situation.

Airport authorities react to the threat by implementing the contagion containment plan, which calls for setting up a cordoned-off quarantine zone and mustering key staff to help maintain the integrity of the area.

Once the operation has begun, doctors and medical staff from hospitals in Phuket are alerted and told to rendezvous at the quarantine area. Dressed in full Personal Protection Equipment (PPE), these key medical staff are responsible for screening not only the sick passenger, but all people disembarking the aircraft.

Deputy Phuket Provincial Chief Medical Officer Dr Wiwat Seetamanotch outlined the reception protocol: “When the plane lands, all passengers are ordered to stay in their seats until medical staff have evacuated the patient [from the plane].

“Once the potentially infectious traveler has been removed from the aircraft, the crew and remaining passengers are escorted to the quarantine area for physical examination. If their results are normal they’re allowed to leave the containment site,” he said.

“However,” he stressed, “they must report periodically, in person, to the Surveillance and Rapid Response Team of the Provincial Public Health Office until the end of the virus incubation period.

“Anyone getting off the aircraft who is suspected of carrying an infectious disease will be automatically transferred to Vachira Phuket Hospital for medical treatment,” he added.

Dr Jessada Jongpaiboonpattana, Hospital director at Vachira Phuket, told the Gazette how an infectious case arriving at the hospital would be dealt with.

“First, the staff who transfer the patient from the ambulance to the hospital will be wearing full PPE.

“The patient will be brought through a special entrance into the negative pressure suite in the “200 Pi” (“200 Years”) building. The suite consists of five negative-pressure treatment rooms; one for patients in severe condition and the others for less severe infectious cases,” he said.

One item of vital equipment, sometimes overlooked in such rushed circumstances, is the now “dirty” ambulance that was used to transport the infected patient to hospital.

“Once the casualty has been taken from the ambulance, the vehicle will be removed from service and thoroughly cleaned with an antiseptic solution. Other contaminated medical equipment will be cleaned by normal sterilization methods,” said Dr Jessada.