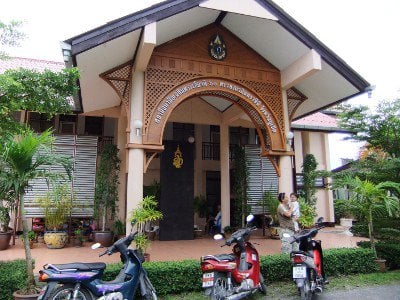 PHUKET: Officials are pushing for the public health clinic in Chalong to be upgraded to a fully equipped hospital in order to reduce the number of people dying en route to emergency wards at major hospitals in Phuket Town.

Clinic Director Ruedee Suriya told the Phuket Gazette that on average two people every month die while on their way to one of the main hospitals in Phuket Town.

“We can’t handle serious cases here so they have to go to Phuket. It’s a long way to Vachira Hospital and the traffic adds to the journey time.”

“Most casualties that die in transit have either been involved in a road accident, a violent assault or have been rescued from the sea,” she added.

“At the moment, about 70 people a day visit the clinic. There are two nurses working during the day from 8:30am to 4:30pm and a duty nurse until 11pm. Doctors from Vachira Hospital are on duty every Tuesday morning and all day Thursday,” she said.

“We agree with the plan to upgrade the clinic. If the plan goes ahead, we will have a 30-bed inpatient ward,” Ms Ruedee said.

Vice Governor Sommai explained that, at the Cabinet meeting in Phuket in March, a budget of 186 million baht was approved in principle to upgrade the Chalong health clinic facilities and services to hospital quality.

“We expect to get the budget from the Ministry of Public Health and have the hospital open by August 12, 2016 to celebrate HM the Queen’s seventh-cycle birthday [84th birthday],” V/Gov Sommai said.

Phuket Public Health Office Deputy Director Dr Wiwat Seetamanotch believed it was a very good sign that the Cabinet had, even if only in principle, approved the project.

“Previously we submitted the project to the Ministry [of Public Health]. It was rejected because it is not ministry policy to have hospitals in subdistricts as the population density is usually not enough to warrant a full hospital.”

“However, our hospital project was approved in principle and we must now try our best to acquire the 186mn baht as soon as possible. Many other projects were also ‘provisionally’ approved by the Cabinet and they too will need funding by the Ministry of Public Health.”

Dr Wiwat explained that 102mn baht would be needed for an outpatient building and the remaining 84mn for staff accommodation.

“If we reach a point where we have not yet received the budget, [Phuket] MP Raywat Areerob has assured me he will lobby the Cabinet. He will press the issue in Parliament, asking why the project has been abandoned when politicians have stated it as their intention,” said Dr Wiwat.

“I believe we will surely get the budget,” he added.

Dr Wiwat also suggested that they should take the opportunity at the ASEAN Health Ministers Meeting, scheduled for July 2-6 in Phuket at Mövenpick Hotels & Resorts, to thank the Cabinet for their assistance.

“We have to show that we already have the land for the project and a list of investors, including the capital they’re prepared to put into the project, to prove our good intentions to the Cabinet.

“The money does not need to be transferred yet as we have another four years to collect it. I do not think it will be a problem to subsidize that amount until then.”

“As Prime Minister Yingluck Shinawatra is scheduled to open the meeting, we could have representatives from Chalong there to thank her and Wittaya Booranasiri, the Minister for Public Health.

“We need to remind her of the project because so many others were presented [at the mobile Cabinet meeting], it would be easy to forget this one,” said Dr Wiwat.