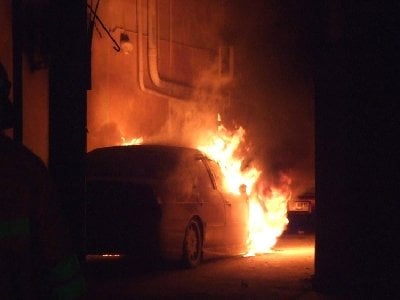 PHUKET: Phuket Police are investigating a wave of arson attacks, all with the same modus operandi, that have damaged or destroyed six vehicles on the island over the past week

The latest attack, at 1am today, took place on a passenger car parked on a small soi off Phang Nga Road, in the heart of Phuket Town.

Equipped only with a chemical fire extinguisher, they were unable to stop the blaze as it spread from near the front left tire to engulf the entire front half of the car.

The flames were finally doused about 30 minutes later, but only after the car was damaged beyond repair. Important documents contained in the passenger seating area were also destroyed.

Car owner Patcharin Kongpetch, a native of Songkhla, told police the car had been parked in the same location since 8pm yesterday.

When the fire broke out she was sleeping on the second floor in the office building of the Sri Sawad Power Co Ltd, where her husband is branch manager, she told police.

A neighbor informed her of the fire at about 1:30am, she said.

Ms Patcharin said she had no idea as to the motive for the attack, as she had been parking in the same spot for two years and hadn’t had any disputes with anyone.

Saying she used the vehicle to commute daily to her job at a stone processing shop in Rassada, she told police she didn’t think the arson could be related to her husband’s work.

All used the same method, with the arsonist starting the blaze by placing a gasoline-doused tire next to the front-left tire of the target vehicle. Five passenger cars and one pickup have been attacked. All were parked near the homes of the car owners at the time, Capt Somchai said.

Police assume all of the attacks were carried out by the same person or group of people, who are presumed to have considerable knowledge of auto mechanics.

Police are investigating finance issues or revenge as possible motives for the attacks.