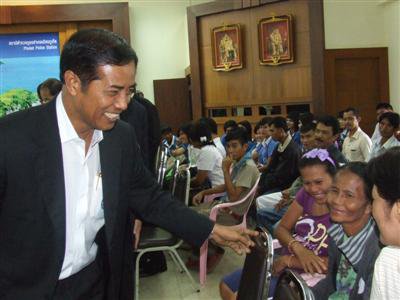 PHUKET: Deputy Interior Minister Thavorn Senniam was so impressed with the effort of Phuket City Police Station to get all motorbike riders and passengers to don safety helmets that he has asked the Governor’s Office to extend the initiative across the entire province.

After joining some 30 officials in viewing a locally-produced road accident movie on the fourth floor of the station, Mr Thavorn came out in strong support for the initiative and revealed that he lost his younger brother, Khamnueng Senniam, from head injuries sustained in a 1982 motorbike accident.

Mr Khamneung died of a cerebral hemorrhage seven days after his head hit the pavement because he was not wearing a helmet at the time, he said.

Mr Thavorn said he observed on the way from Phuket Airport to the police station that over 95% of motorbike riders were wearing helmets.

The fact that so few people failed to don them indicated the project was effectively increasing public awareness, he said.

Increased helmet use also saves government funds by reducing the amount of money needed to treat accident victims and, in the long-term, to care for people with permanent disabilities, he noted.

“I would like the other police stations [in Phuket] and in other provinces to campaign as seriously as Phuket City Police Station has done to get people wearing helmets. Also, I will suggest this project in other areas,” he said.

Noting that police are allowed to keep only 35% of the proceeds from fines collected from traffic law violations, he said that the public awareness campaign showed Phuket City Police were more interested in public welfare than their own purse strings.

After the viewing of the road accident film, there was a segment of footage showing a motorbike taxi driver being given a free crash helmet by a Channel 9 reporter.

The taxi driver said the helmet, donated for the campaign by the Phuket Chamber of Commerce, was substandard and too flimsy to provide the needed protection in the event of an accident.

Phuket Chamber of Commerce president Kriangsak Suksombun, who was present at the time, said he would raise the matter for discussion among chamber members.