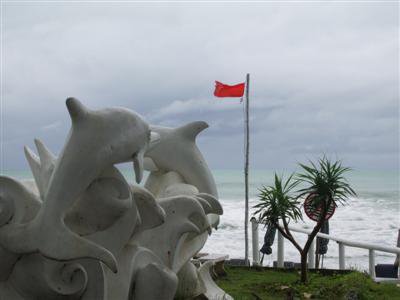 PHUKET: The rough surf that arrived with the monsoon season has claimed two lives and resulted in at least 117 swimmers being dragged to safety ashore between April 26 and June 25, according to statistics recently released by the Phuket Lifeguard Club.

The club, which patrols Phuket’s main beaches, took on the work on April 26 after signing a contract with the Phuket Provincial Administrative Organization (PPAO).

The club has 83 lifeguards stationed at 13 beaches on the island.

PPAO Vice-President Soratham Jinda said that despite best efforts by Phuket lifesavers during their first three months on duty, many tourists continue to needlessly endanger themselves by ignoring lifeguards’ warnings and entering treacherous surf conditions.

Red flags mean “no swimming” while yellow flags mean “potentially dangerous conditions” as they do around the world.

Surin Beach lifeguard Sayan Burirak, 29, explained that one major problem was language. “The people are from different countries. Some understand the warning, but some don’t, such as Russian tourists who don’t understand English.”

“When we tell them, we usually use easy English, such as ‘dangerous here’ and we try to lead them to a safer place to swim or stop them from swimming at all if it’s very dangerous,” he added.

The number of “near drownings” is the highest on record for a three-month period, with 54 Thais and 63 foreigners plucked from the sea just in the nick of time.

The most recent victim to fall prey to Phuket’s monsoon-season surf was 21-year-old British woman Rebecca Callaghan, who drowned at Karon Beach on June 18.

This figure comprised 44 near drownings, 16 jellyfish stings and eight others, including three injuries sustained in jet-ski mishaps.

Mai Khao and Kata Noi beaches have recorded no incidents since the Phuket Lifeguard Club started their patrols there.