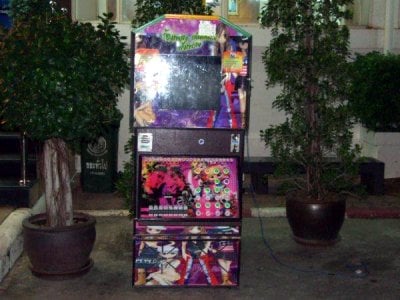 The raid followed an inspection of the premises by an informer who entered the shop, played on the machine and confirmed that they were being used more for gambling than singing purposes.

The owner of the machine was identified as 30-year-old Kanokporn Pankratoke.

She was arrested at about 9pm and taken to Phuket City Police Station, where subsequent investigation revealed she had once been arrested on similar charges in Nakhon Sri Thammarat.

After learning that the suspect had two similar machines in operation in the Bang Khontee area of Rawai, Phuket City Police contacted their Chalong counterparts who seized the two units.

Like the machine in Phuket Town, these produced small paper tickets.

Ms Kanokporn denied the tickets were part of a gambling racket and insisted they were given out as rewards for good singing and that similar machines could be found all over the island.

She said she was being singled out and that the arrest was prompted by her failure to pay an increase in protection money from 5,000 baht to10,000 baht per month to people who identified themselves as state officials.