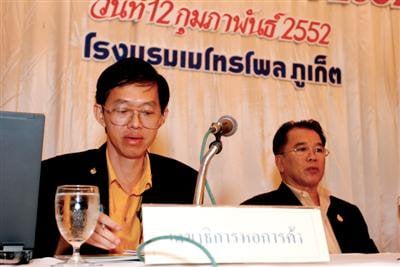 PHUKET: Dr Sirichai Silapa-archa was elected as the new president of the Phuket Chamber of Commerce (PCC) at the association’s annual election conference, held at the The Metropole hotel on February 12.

Dr Sirichai Silapa-archa, 51, is an assistant director at Vachira Phuket Hospital, where he is a surgeon specializing in urology. In addition to his medical training, he also holds an MBA degree from Chiangmai University.

A nephew of former Prime Minister Banharn Silapa-archa, Dr Sirichai moved to Phuket in 1987. He now operates a clinic that offers computer X-ray imaging, cosmetics sales and other services.

Dr Sirichai was formerly a member of the now-defunct Chart Thai Party, Thailand’s second-oldest political party until its dissolution by a Constitutional Court ruling on December 2 last year.

The 25-member PCC board retains a lot of familiar faces, with just six new members.

Dr Sirichai will soon arrange a board meeting to assign duties to these members and discuss policy issues.

“The PCC is happy to support the government in planning the country’s economic and social development. All committee members will have an open platform to express their views. The PCC’s main goals are to achieve sustainable economic policies that help the people. The public will be invited to play a role,” he said.

The PCC has a role to play in helping the country get through these tough economic times and it would do this by making its organizational approach more flexible, he said.

Mr Eam told the Gazette that he intends to remain active in the PCC in an honorary position.

It is unfortunate that Thai governments don’t pay as much attention to Chamber of Commerce recommendations as governments in Singapore, Malaysia and France do when drafting policy, he said.

Asked about Prime Minister Abhisit’s recently revealed stimulus package, he said, “I think he is trying to manage the country, but personally I think we still have a long way to go because he still lacks management experience and can’t see the forest through the trees – especially about helping the tourism sector.

Abhisit is not focusing on the right places, unlike the previous government that helped the industry cope in the aftermath of the tsunami disaster,” he said.