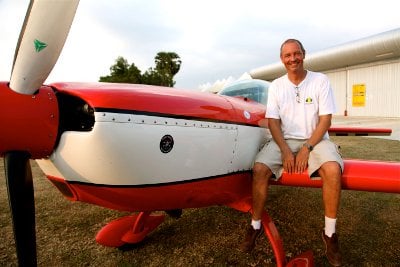 PHUKET: The countdown to Phuket’s annual Patong Carnival is over. The six-day event began at 9am today with ceremonial offering of food to monks at Loma Park on the Patong beachfront.

After the alms-giving ceremony, at 10:15am the sea of vendors at the park opened their stalls to sell food and drinks.

The Phuket Flying Club will join the opening festivities with an aerobatic display by Les Vorosmarthy in his world-class EXTRA 300 stunt plane at 1pm and a repeat flyover at 5pm today.

The airshow will return to the Patong skies at 1pm tomorrow and Saturday.

For tourists and locals alike, the main attractions will start at 5pm with the traditional Patong Carnival Parade.

The parade will start from Phang Muang Sai Kor Road and continue on Prachanukhro Road. It will then travel along Thaweewong Road (the beach road) until it reaches the football pitch next to Loma Park.

The opening ceremony for Patong Carnival 2011 will commence at 7:50pm.

For music lovers the entertainment begins later in the evening with concerts being held concurrently on both stages.

On the beachfront stage next to the police box at the end of Soi Bangla from 8pm will be a live concert by popular Thai country music singer Tai Oratai and traditional performances by students from Wat Hui Pom Nok Municipality School in Songkhla.

On the second stage set up at the football pitch next to Loma Park from 9pm will be the hugely popular southern Thai singer Baowee and his band performing live.

Click here to see the rest of the program of main events being held during carnival.