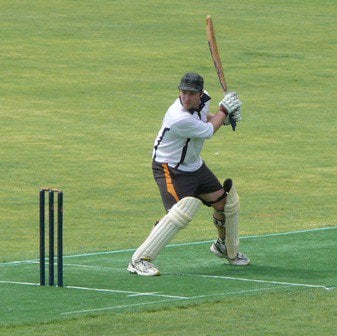 PHUKET: A second win for the Village in the Phuket Island Furniture League ensured a leap frog into first place after a demolition of league newcomers, Thanyapura Tigers at the Alan Cooke Ground (ACG) on Sunday.

Compared with previous seasons when the Village were more a social side, this season their squad shows a good balance of experienced batsmen and effective strike bowlers.

Following this latest result, the Village could very well be competing for honors by season’s end.

However, the social aspect was very much in evidence with great number of supporters filling the ACG clubhouse to capacity and spectators even had to arrange camps at the opposite side of the ground in order to watch the day’s play.

The Tiger’s won the toss and put the Village into bat. Their strategy backfired. Ill-disciplined bowling churned out 79 wides which in turn resulted in a 40 over match dragging into a 53 over nightmare. Adding further misery to their fielding disaster was a five over penalty incurred for not bowling their overs in the allotted time.

Opener Martin Foster hit an unbeaten 40 runs, supported by fellow opener and captain James Firth (16), Paul Stamp (15), and last bat Diwan Mydeen (11 not out). Extras top scored for the Village with 84 out of the total of 185 all out.

The opening stand of 84 from Foster and Firth set the platform for the innings until Tigers’ captain, Barry Buck, handed over the wicket-keeping gloves to Martin Hill in the 15th over. He dismissed Firth with his very first ball and continued the onslaught taking the first five wicket haul at the ACG for 28 runs from his 8 overs.

He was well supported by Paul Lattimore 1 for 25 from his 8 overs who along with Buck managed to contain the damage somewhat with only 36 runs being scored from the final 10 overs. This compared to an average run rate of 5 runs per over during the first 30 overs of the innings.

However, the damage had been inflicted by the opening spray of speedsters Ryan Dunn, Roshan Jaysuriya and Martin Hill who may need a visit to Bill Stahmer’s cricket coaching clinics in hopes of preventing a repeat performance.

Tiger’s innings began with opener Ryan Dunn who looked to prove his 80 not out against the youthful Leopards in his previous match was not fortuitous. And he started confidently by dispatching Village opening bowler Tom Gordon for six. Despite the dent to his figures, Gordon bore down on Dunn and clean bowled him with his next delivery for 15 runs.

Martin Hill (3) was next to go, run out when Daniel Smith hit a straight drive off Foster’s bowling, who in attempting to stop the ball managed to deflect it onto the stumps.

Foster then dismissed Smith in a similar fashion when he took advantage of the batsman leaving his crease after Smith was dealt a blow by Gordon.

Garry Carrick (0) also showed indiscipline at the crease after completing a run he was also run out when keeper Firth was quick to take the bails off after Gordon’s neat fielding.

Roshan Jayasuriya (24) and Dan Smith (15) put on a 52 run partnership to offer a semblance of respectability to the Tiger’s innings. No other Tiger’s batsmen achieved double figures and Joseph Nagy who was dismissed for a golden duck will now join the others on the “wall of shame” at the ACG clubhouse.

Barry Buck, captain of the losing side, was awarded man of the match for his 5 wicket haul, with Foster taking second and Jaysuriya placing third.

After 5 matches this season, the league table sees the Village on top with Patong Cricket Club in second and Tigers in third place.

On Sunday December 18, the young Leopards take on the might of Laguna Phuket in what could prove a decisive game for both teams.